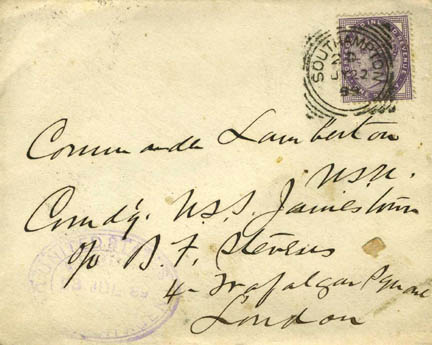 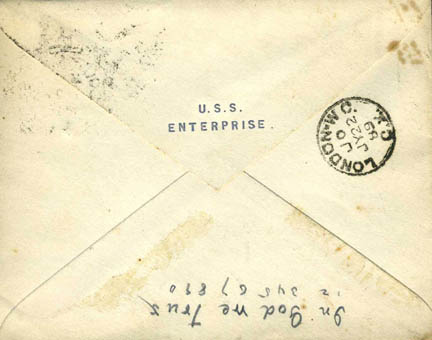 At the February meeting of the Cumberland Valley Philatelic Society a retired stamp dealer came in and asked if anyone had any interest in naval covers? Did I? And this was the first time anybody ever brought any naval covers to one of our meetings.

He had a dealer’s box full of covers that had not seen the light of day in many a moon. I quickly picked out 25 covers that seemed to have promise (I did not have my USCS Catalog with me, so it was a shot-in-the-dark for most of them).

The next day I started going through them and sending scans of them to Greg Ciesielski for him to put them in the Naval Cover Museum (www.navalcovermuseum.org). When I got to this cover, since it was dated 1889 it would not be in the USCS Catalog, so it was time to turn to Google to see if a CDR Lamberton could be found. To my amazement, not only was he found…but he fit extremely well into what I was working on, an exhibit about the Navy and the Philippines. As it turned out, Benjamin Peffer Lamberton was born near my home and attended high school in Carlisle, PA (the same town that was home to the Carlisle Indian Industrial School – Jim Thorpe’s alma mater).

The plot thickens even more. After three years of study at Dickinson College, Lamberton transferred to the Naval Academy and was appointed midshipman in 1861, in time to see Civil War service. By 1898, Lamberton has seen 30 years of service at sea, and was ordered to command of the cruiser Boston in the Asiatic Fleet, but by the time he got to the Far East war with the Spanish was imminent. Commodore Dewey needed a competent seaman administrator as his chief-of-staff, and so he “appropriated” Lamberton. This placed him at Dewey’s side at the Battle of Manila bay in the flagship Olympia (CAPT Charles Gridley, commanding).