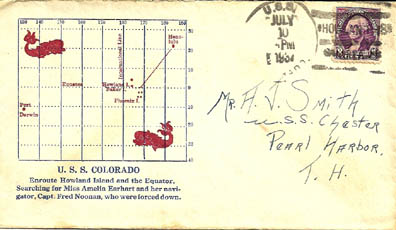 On July 2, 1937 Amelia Earhart and Fred Noonan departed Lae, New Guinea on the 32nd day of their around the world flight attempt. Their destination was Howland Island, a small island barely a mile long and a quarter mile wide and more than 2500 miles away. From Howland they planned to fly on to Hawaii and then to Oakland, California, completing the around the world flight. This was one of the most difficult legs of their trip due to the long over water distance and precise navigation requirements. The Coast Guard cutter Itasca was on station at Howland to guide them to the island. Though the Itasca clearly heard radio transmissions from Earhart, two way communications between the ship and aircraft were never established.

About one to two hours after receipt of the last transmission from Earhart, Itasca began to search for the missing plane and aviators, searching north and west of Howland but was unable to find anything. The US Navy soon joined the search and during the next few days sent ships to the area under the orders of President Roosevelt to search the area for 30 days. The aircraft carrier USS Lexington, destroyers USS Lamson, Cushing and Drayton and seaplane tender USS Swan were sent to perform the search as well as the USS Colorado. Swan had been performing as a guard ship for the flight between Howland Island and Honolulu.

The first ship on the scene was the battleship USS Colorado. She was directed to depart from Pearl Harbor on July 2. During the next 5 days she sailed towards Howland and could do no more than monitor the radio. She arrived at Howland on July 7 and would take charge of the search efforts until the Lexington arrived on July 12. During this period the Colorado utilized her three Vought 03U-3 float planes in the area around the Phoenix Islands, Howland Island, McKean Island and Gardner Island. The last search flight by the Colorado’s planes was on July 10. The Colorado also refueled and provided provisions for the USS Swan on this day.

Colorado then departed the area, meeting the incoming destroyers for refueling on July 12 and she arrived at Pearl Harbor on July 16.

This cover was postmarked aboard the Colorado with the ships Type 3(BC-BBT) hand canceler. The strike is poor although “HOWLAND IS” clearly shows in the killer bars. The cachet shows the area of the search. The cachet is almost surely shipboard printed.  I’ve seen two examples of it and it is very unlikely it was printed before or after  Colorado ‘s brief cruise.  There was little time beforehand.  This cover was postmarked on the 10th and the other one was on the 16th that left no time after the ship arrived either.  One was mailed at sea, the other on the day of the ship’s return to Hawaii.  Both were non-philatelic pieces mailed to different parts of the country.  Consequently neither cachet could have been applied after mailing either.