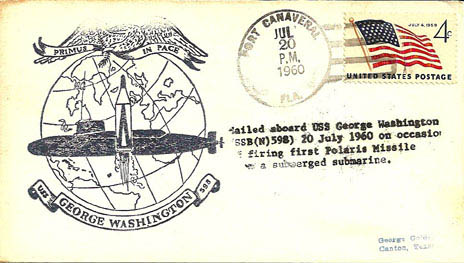 The 50 th anniversary of the first firing of a Polaris missile from a submerged submarine will occur on July 20, 2010. With this firing, the US Navy gained the ability to fire a ballistic missile carrying a nuclear weapon from an unseen submarine. Prior to this firing from the USS George Washington, the Navy possessed the ability to fire guided missiles from a surfaced sub, such as the USS Grayback, but this method put a hazardous fueled missile on the deck of a submarine, particularly hazardous during rough weather and it exposed the submarine, making it vulnerable to attack. With the ability to fire while submerged, crewmen did not need to be on deck and potentially the submarine would remain undetected after launch.

The USS George Washington was originally being built as an attack sub and would be named USS Scorpion. However with the launch of Sputnik in 1957, there was an urgency to have a nuclear ballistic missile sub and the ship was modified with an inserted section that would house the missiles and renamed USS George Washington and commissioned on December 30, 1959. While the sub was being built, development of the Polaris missile was taking place with all the expediency of a nation concerned about falling behind in the arms race.

On June 28, 1960, the nuclear powered USS George Washington left port in Groton and headed for the missile test area near Port Canaveral with two Polaris missiles aboard. She fired a dummy load in early July. On July 20 she fired the first missile at 12:39 hours and less than two hours later test fired the second missile with both missiles impacting 1,100 nautical miles down range as planned. The age of the ballistic missile submarine had arrived for the US Navy.

The George Washington would go on to serve 55 deterrent patrols during 25 years of service; eventually being taken out of service in 1985 after a period of service as an attack submarine.

The Polaris A1 missile would be modified and there would be two more versions, the A2 and A3 that increased the range of the missile as well as improved the capabilities of the warhead. The Polaris would be carried aboard all of the US ballistic missile boats built between 1960 and 1966, known as the “41 Submarines for Freedom” and was replaced in 1972 with the Poseidon missile. British submarines also carried the Polaris missile for many years.

The September 1960 illustrated this cover and mentioned that the sub was applying an attractive cachet and had applied a typed cachet marking the first firing of a Polaris missile from a submerged submarine. The cachet is the ship’s official rubber stamp cachet and duplicated the ship’s patch design and was used for many years. The type written rubber stamp cachet was used for the occasion of this missile firing mission. The cover is address to George Goldey who would sponsor a number of nuclear submarine event covers under the name of Goldcraft.