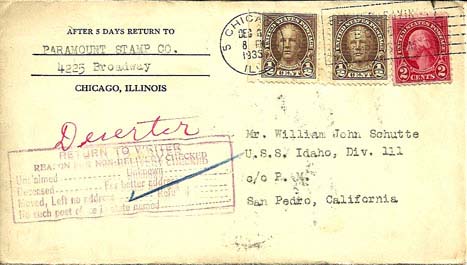 Apparently Navy life is not for everyone. This cover was mailed to a sailor aboard the USS Idaho December 6, 1935 and was returned to the sender marked “Moved, Left No Address”. A hand written note adds that the recipient was a deserter, which makes this a fairly interesting piece of mail and it explains why no forwarding address was left!

Of interest to collectors is the letter inside the cover. It is from the Paramount Stamp Company of Chicago. This was a stamp company that offered stamps on approval. They had ads in Popular Mechanics (and probably other magazines) and an advertisement in the December 1936 issue ran as: “Cannon! Set of stamps cannon, firing squad, cavalry charge and 200 other different stamps only 10 cents to approval applicants.” The letter to the Idaho sailor, dated December 6, 1935 stated:

“Dear Sir: We sent you on approval, on Oct. 14 th a selection of stamps valued at 75 cents. Although you were expected to pay for these stamps, or return them within ten days, to date we have not heard from you.

“We feel sure that you do not mean to keep our stamps without paying for them. We know from long experience that stamp collectors are an unusually honest class of people. But occasionally, being busy with other things a collector will put off from day to day the return of an approval selection, with the best intentions of “doing it tomorrow”.

“In the end, however, this works an injustice on the dealer. So won’t you please devote two minutes of your time to us, RIGHT NOW? Just slip our approval selection, or your payment for it, into the enclosed return envelope, and drop it into the mail box – TODAY!
“Then we shall neither have to discontinue our pleasant dealings with you, nor shall we be forced (by your continued silence) to take any serious or disagreeable steps to recover our stamps. Respectfully yours, P.S. If your returns are already in the mails, please disregard this letter.”

I wonder what ever happened to the stamps.

As for the USS Idaho, this battleship was commissioned in March 1919, armed with 12 14” guns. She participated in the usual fleet maneuvers and training exercises and reviews by dignitaries. She was part of a force that sailed for Samoa, Australia and New Zealand in 1925. She operated out of San Pedro for a period, then spent 3 years being modernized at Norfolk when the cage masts were replaced with tripod masts, antisubmarine protection was received and better machinery installed. She returned to be home ported at San Pedro in April 1935 where she remained when the letter from the Paramount Stamp Company arrived and received a clean Type 6 cancel on the reverse dated December 12, 1935. During World War II, the Idaho served as a bombardment ship, participating in actions that resulted in 7 battle stars, including the Aleutians, Kwajalein, Guam, Peleliu and Iwo Jima. She was in Tokyo Bay during the surrender ceremonies and was sold for scrap November 24, 1947.