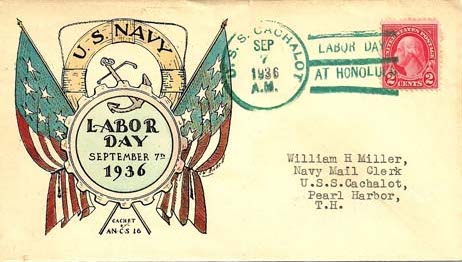 Labor Day is a US holiday that we traditionally view as the end of summer and the three day weekend gives us one more time to enjoy the company of friends and family at picnics and barbecues at the beach or lake. Children are back in school and fall will follow in a couple of weeks.

While there are many holiday naval covers to mark the major holidays such as New Years Day, 4 th of July, Thanksgiving and Christmas, covers marking Labor Day are a little less common. This months cover was the work of sponsor Norman K. Mary (USCS # 584, ANCS #16) and artist C. W. Richell (USCS #251). It is a thermographed and hand colored cover. The design was used on covers canceled on several ships, including the USS Arizona, USS Bridge and USS Cachalot. The cancel used green ink and shows that Cachalot was in Hawaii on this date. Both Mary and Richell prepared a number of holiday cachets during their career. Richell was named King of Cachet in 1934 with his 1934 Labor Day cachet in “Stamps Magazine”.

The Cachalot was originally launched as the USS V-8, SC-4 (Submarine Cruiser). This design was a larger submarine than the S boats already serving in the fleet, armed with large deck guns to slug it out on the surface. Commissioned on December 1, 1933, she was at Pearl Harbor on December 7 and subsequently served on two war patrols in the Pacific and one patrol in the Aleutians before being designated as a training submarine at the Submarine School in New London, Connecticut where she served throughout the war and was decommissioned October 17, 1945.