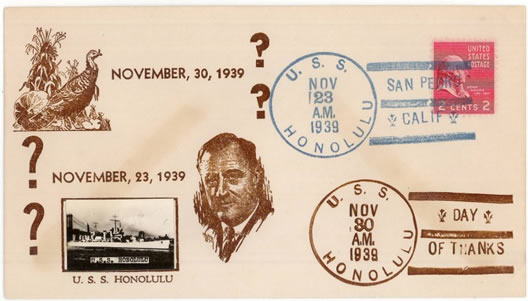 In 1939 there were five Thursdays in November, and in the era before “Black Friday” it was considered inappropriate for businesses to display Christmas decorations or merchandise before Thanksgiving. At the request of numerous retailers, still recovering from the Depression, President Franklin D. Roosevelt issued a proclamation moving the date for Thanksgiving from the last Thursday (Nov. 30) back to the fourth Thursday (Nov. 23). This caused massive disruptions to already-set calendars for such things as work schedules and even high school football games. Half of the states refused to go along with him, and their governors issued proclamations keeping to the traditional “last Thursday” schedule. A couple of years later Congress eventually passed legislation establishing the fourth Thursday in November as Thanksgiving. With this cover legendary cachetmaker Walter G. Crosby illustrates the controversy, with the help of the mail clerk in the cruiser USS HONOLULU.