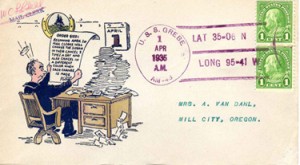 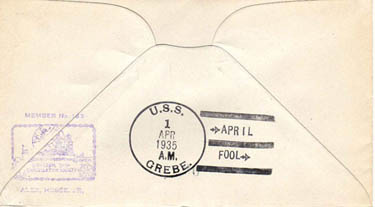 The Order of the Day: “Order 4135, Beginning April 1 st Mail Clerks will change the slogan in their cancel 3 times a day and also cancel in a different color when each change is made.” A mail clerk’s worst nightmare? No, simply some April Fool’s Day humor from Alex Hesse. Alex (USCS #163, ANCS #81) was a printer and cover sponsor, his first covers were sponsored in 1933 and he sponsored covers in the 1970’s with the Farragut Chapter of the USCS.

This design was Hesse’s first design on one of his covers, drawn by Torkel Gundel (identified by the “G” in the design.) Gundel was a first day cover sponsor for stamps but he also did some drawings for Hesse. This design features an overworked postal clerk reading the Order of the Day with piles of envelopes waiting to be cancelled with the canceller and ink pad within easy reach. Of course it is April 1 st so it’s all in jest and the sailor can put his hat back on.

The cachet is thermographed and hand colored, most likely by Hesse himself, a task he and his wife often performed on their kitchen table.

The cover is also signed by W.C. Lobdell (USCS #999, ANCS #84), a Navy Mail Clerk on the USS California at one time and the mail clerk on the USS Grebe.

The cover has 2 cancels from the USS Grebe, a fancy (Type F) cancel on the face, denoting the ship’s location with Latitude and Longitude in the killer bar and a Type 3 on the reverse, noting that all was in jest, Apil/Fool. (Even the ship location appears to be a joke.) Grebe, AM-43, was a minesweeper built in 1918 and commissioned in 1919. Grebe is probably best known for towing the USS Constitution on her 1931-1934 cruise of the East and West coasts of the United States. Grebe ran aground in 1942 while attempting salvage a merchant ship, SS Thomas A Edison and was sub subsequently broken up by a hurricane January 1-2, 1943.