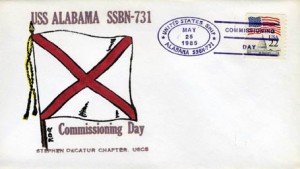 USS Alabama (SSBN-731) was commissioned at the Submarine Base, New London, CT. Over her twenty-five years of service to the nation, she has continued the proud tradition of superior performance at sea established by her predecessors.

At the time of her 25th Anniversary, USS ALABAMA had successfully completed 70 strategic deterrent patrols. In addition, the submarine has consistently earned top Fleet awards and recognition across her quarter-century of service. These honors have included the Battle Efficiency Excellence Award, multiple Departmental awards, the U.S. Strategic Command “Omaha” Trophy, and the prestigious Ney award for best small messdecks in the Navy.

USS ALABAMA earned the distinction of having completed the 100th TRIDENT Strategic Deterrent Patrol in September 1988.

On September 11, 2001, USS ALABAMA was emergency deployed to sea with no notice in the event that the attack on the U.S. expanded to include the west coast.

In 2005, USS ALABAMA completed her first 20 years of strategic deterrence in defense of the United States, and, at the completion of her 68th strategic patrol, completed the final C4 TRIDENT 1 sea launched ballistic missile (SLBM) deployment for the nation.

BLUE and GOLD crews combined on September 7th , 2005 in preparation for a missile upgrade and refueling period. This event, which required more than two years to complete, and refitted her tactical and strategic weapons systems with the D5 TRIDENT II Submarine-Launched Ballistic Missile system.

In May 2009, USS ALABAMA was certified for deployment with the TRIDENT D5 Strategic Weapons System, which marked her return to strategic service.

On the proud occasion of her 25th anniversary, USS ALABAMA (SSBN 731) continues her service as a member of Submarine Squadron SEVENTEEN and Submarine Group NINE homeported in Bangor WA.