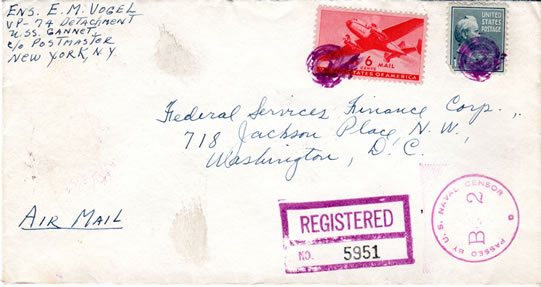 The USS Gannet was built as a minesweeper, one of the Lapwing class “Bird” boats. She was commissioned in July 1919 with hull designation AM-41. Almost immediately Gannet became a tender for aircraft squadrons, serving in Hawaii, the Canal Zone and Caribbean. In January 1936 the ship was reclassified as AVP-8, Small Seaplane Tender. When the US declared war, she was serving in Bermuda. After a quick recall to Norfolk, she returned to Bermuda to serve as the tender for Patrol Squadron 74 (VP-74), flying PBM Mariner aircraft providing air cover for the Bermuda area.

Some of the squadron members served on detached duty aboard Gannet. On May 2, 1942, Ensign E.M. Vogel of VP-74 sent this registered, air mail cover with what was probably a payment to Federal Services Finance Corporation in Washington, DC. The cover received censorship at the Bermuda Operating Base. It is franked with the proper air mail fee for servicemen, 6¢, and the registration fee of 15¢. The cover received the proper mute cancel on the face, with two Type 9 Registered cancels on the back, dated May 2. The mail was flown that day or the following, arriving in New York on May 3 as evidenced by two New York registry cancels on the back. The mail was most likely carried aboard the Pan Am Clipper flight between Bermuda and New York, FAM-17. The cover then was carried via air to Washington, arriving on May 4. If the officer’s payment was due on the first of the month, he managed to get it there only 3 days late!

Meanwhile, the Gannet continued to provide support in Bermuda. On June 3, she took part in an unsuccessful search for a torpedoed merchant ship, SS Westmoreland, sunk by U-566 on June 1. Gannet was returning under escort of the British armed yacht HMS Sumar on June 7 when U-653 fired on Gannet at 04.20 in the morning, missing the ship. At 07.42 she attacked again and this time the torpedo struck home and Gannet sunk in 4 minutes. 40 survivors were picked up by the USS Hamilton and 22 others picked up by two Mariners from VP-74 who made landings in rough seas. There were 16 lost from the Gannet.