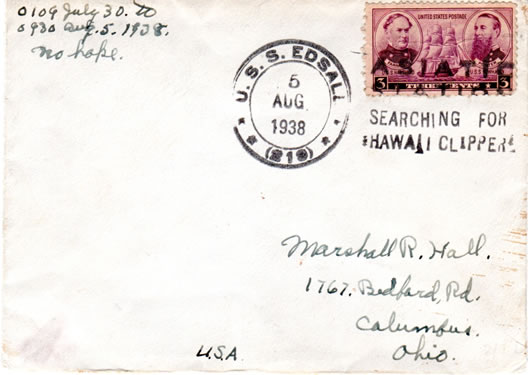 Pan American Airlines began trans-Pacific airmail service on November 22, 1935 and later extended the service to passenger flights on October 21, 1936. Service began with the Martin M-130 aircraft. There were 3 M-130’s, named the China Clipper, Philippine Clipper and Hawaii Clipper. The M-130 were 4 engine, 26 ton, flying boats capable of carrying 15 passengers with sleeper berths or up to 46 passengers in a different configuration, a crew of nine and cargo, including air mail. Flights had a terminus in Oakland, California and Manila Bay, Philippines. Service was the name of the game with Pan Am and no passenger comforts were spared. Overnight stays would be made in Hawaii, Midway, Wake and Guam.

Regular flights had been in service when disaster struck on July 28, 1938.

The Hawaii Clipper was in bound to Manila from Guam, contacting the radio station at Panay Island at 12:11 PM, reporting the position as two hours out from the Philippine coast, requesting a weather report. When Panay Island attempted to raise the Clipper at 12:12 PM, there was no response and the plane was never heard from again. Once the plane was overdue, Pan Am requested the Navy Commandant in Manila to search for the plane. 13 Navy ships put to sea to perform a search.

The Army Transport Meigs was also in the area and the crew sighted an oil slick on July 30. Meigs took a small oil sample. Over the next several days, Navy destroyers, submarines and aircraft, as well as Army aircraft searched over a large area. No additional oil slicks were sighted and no wreckage was sighted. The destroyer Edsall was part of this search party, beginning the search according to this cover at 0109 July 30 until the search was called off 0930 August 5.

Tests of the oil samples revealed no presence of lead that would have indicated engine oil.

The crew of nine and the six passengers were never found.

Among the passengers was Wah Sun Choy, a wealthy Chinese restaurateur carrying three million US dollars from the US government to be turned over to the Chinese government for War Relief.

No trace of the plane, crew or passengers was ever found and the mystery of the loss of the Hawaii Clipper is still a mystery more than 70 years later.

The cover this month was sent by Gunners Mate 1st Class J.E. Loyd of the USS Edsall to Marshall Hall, a naval cover collector. Writing on the inside flap indicates that Edsall would arrive Manila August 7. The date of the cancel is the date the search was called off, the corner card area noting the dates of the search and the comment “No hope.”