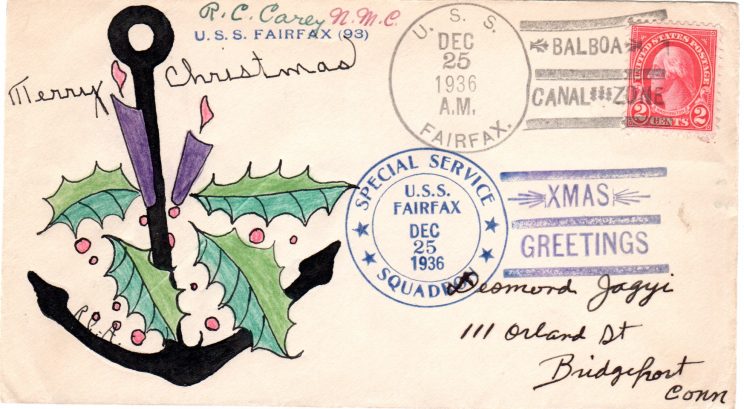 The destroyer USS Fairfax was serving in the Special Service Squadron in the Canal Zone in 1936. This cover features the ship’s Type 3(AC-BBT) cancel as well as a Type F cancel. Fairfax, DD-93, was a Mare Island built destroyer, commissioned in 1918 as part of the World War I Naval build up. She was decommissioned in 1922 and remained in mothballs until recommissioned in 1930. She would serve in the US Navy until 1940 and was then transferred to England as part of the Lend Lease Act, when 50 aged destroyers were given to England to serve as convoy escorts.

She served in the English Navy as HMS Richmond until 1941, was transferred to the Canadian Navy and then to the Soviet Navy as Zhivuchi. She was finally scrapped in 1949 after a long life.

Ron Carey was the Navy Mail Clerk aboard Fairfax for a period and he serviced many covers and seems to have enjoyed using Type F cancels and adding interesting killer bar slogans, such as the “Xmas Greetings” on this cover.

The beautiful cachet is an add on cachet although I do not know the identity of “RC.A” as signed on the cover.