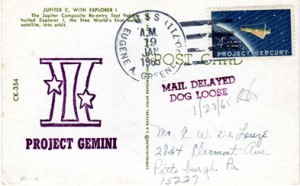 The recent 40 th anniversary of the Apollo 11 moon landing brings back memories of the space race and the early Mercury and Gemini missions. These space missions and crew recoveries by US Navy ships helped renew an interest in naval covers. Several sponsors prepared cachets, notably Morris Beck, and collectors could send for recovery force covers with official mission rubber stamp cachets, many of them provided by Morris Beck.

During the early 1960’s, the United States was in a race with the Soviet Union to put the first man on the moon. The Soviet Union put the first astronaut in space and the first person to orbit the earth. Later they would be the first to have a space walk. The United States had issues with rocket and capsule design but proceeded with a methodical process where each mission would test some process or equipment so that each mission built on the previous missions and advanced the program.

After the Mercury program ended, the next flight program was called Gemini with a space capsule designed for 2 astronauts. Prior to launching a manned mission, the spacecraft underwent testing. The Gemini II mission was an unmanned mission to test the capability of the space capsule’s heat shield. More than technical problems plagued the space program. In August 1964, hurricanes threatened the Titan II/Gemini launch vehicle and it was dismantled until Hurricane Dora passed over. It was reassembled on the pad in September 1964. After additional testing launch was scheduled for December 9, 1964 but a loss of hydraulic pressure shut the engines down about one second after ignition.

Things went better on January 19, 1965, the rescheduled launch date. Lift off occurred at 9:03 AM EST and the capsule reached an altitude of 106 miles and at the 6 minute 54 second mark, retrorockets were fired for reentry. The heat shield and retrorockets functioned as planned and the capsule splashed down 2122 miles down range after an 18 minute 16 second flight. The capsule was recovered by the USS Lake Champlain. 16 ships served to support the mission.

Collectors who sent for covers on their own received a generic Project Gemini cachet. At least 13 ships are known to have serviced covers for this flight. This month’s cover is actually a post card and was cancelled aboard one of the support destroyers, the USS Eugene A. Greene, DD-711, with the ships Type 2(n+) cancel. In keeping with the delays that occurred with this space flight, return of the post card to the sender was delayed by a loose dog. The letter carrier was unable to make delivery on his first attempt on January 27, 1965. Fortunately he tried again and this card survives as a souvenir of the space missions of the 1960’s and with an interesting auxiliary postal marking