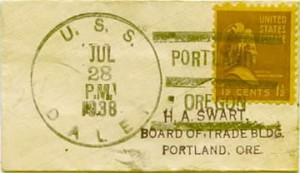 January 2005 Cover of the Month

So what’s so special about the cover this month? First, it’s not a cut square though it looks like one at first glance. It is actually a very small envelope. See the second illustration to show the size as measured beside a perforation gauge. The envelope measures 1 3/4″ x 3″. It appears to be a commercially made envelope, the flap is tucked inside the envelope and half sealed. An envelope couldn’t be much smaller and still contain a Type 3 cancel. The 1 1/2 cent postage paid the Third Class, Single Piece rate that was in effect at the time. This is the smallest naval cover I have ever seen.

The envelope was cancelled aboard USS Dale, a destroyer, DD-353. Dale was a relatively new ship, commissioned just less three years prior on June 17, 1935. She served as a training ship at the gunnery school in San Diego and was likely on a training cruise when she stopped in Portland, Oregon in the summer of 1938. Dale would move to Pearl Harbor in October 1939 and was stationed there on December 7, 1941, getting underway to patrol off the harbor entrance. Dale would serve as a destroyer screen during the war, screening task forces and convoys. She took part in the Battle of the Komandorski Islands in Aleutian waters. Dale was decommissioned after the war on October 16, 1945 and sold in December 1946 for scrap. She earned 12 battle stars for World War II service.

Most likely this cover never went through the mail stream though it is possible. The face is smudged and the back of the envelope is smudged as though it rubbed on other mail articles. The addressee is local, a Portland address. (H.A. Swart is not listed in the 1938 USCS roster.) The envelope could have been handed back after canceling, mailed in another envelope or mailed as is. This cover was once part of the Jack Howland collection. There is a handwritten “10” on the back, probably a sell price of 10¢ at one time.