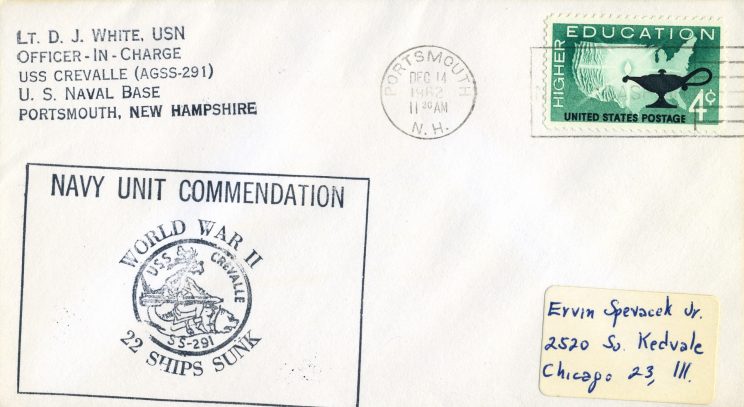 Motor Machinist First Class Robert L. “Bob” Yeager was a ‘plank owner’ in CREVALLE, having been a Fireman in her at commissioning June 24th, 1943. By September 11th, 1944, he had reached the ‘exalted’ rank of first class petty officer (wartime speeds promotions!). On this day, CREVALLE was in her fifth war patrol, and was searching for the enemy off the south coast of Celebes Island. The commanding officer, LCDR Frank Walker made a decision to surface at a high rate of speed in order to get up quick for a look around, alert that enemy planes may be patrolling this close to land. As CREVALLE broached, her bow planes failed in the full dive position. Two men had reached the bridge, LT Jim Blind and lookout Gunner’s Mate Second Class Bill Fritchen. But the combination of speed and the bow planes in full dive drove CREVALLE back down with a steep down angle, stranding Blind and Fritchen, and throwing all of the officers below decks into a dazed pile in the conning tower or control room. Manning the phones in the control room was Machinist Bob Yeager. Yeager recognized immediately the danger facing CREVALLE as the boatraced toward the bottom. He asked plaintively “are there any officers on the line?” He heard none. He quickly gave the order “all back emergency!” Slowly, ever so slowly, CREVALLE clawed her way back up to the surface. Technically, only the diving officer or commanding officer should have given the backing order, but Yeager’s training and submarine qualification program had instilled in him that individual initiative in submarines is imperative, and sometimes requires junior men to take extraordinary action. When the situation stabilized, and CREVALLE made her way back to the surface, Lookout Fritchen was quickly found. LT Blind was not. It was later determined that Blind had deliberately shut the topside hatch by force from the outside, thus helping save CREVALLE. LT Blind had been married to his Australian sweetheart for less than two weeks. A board of inquiry concluded regarding the actions of Planesman Yeager that: “”His experience as battle-station stern planesman since CREVALLE’S commissioning had probably qualified him better than any other man on board to make such a decision”. Yeager was awarded a Silver Star. LT Blind was awarded a Navy Cross, and his citation read:

The President of the United States takes pride in presenting the Navy Cross (Posthumously) to Howard James Blind (0-108587), Lieutenant, U.S.Navy (Reserve), for extraordinary heroism and intrepidity in the line of his profession upon the occasion of a surfacing accident to the U.S.S. CREVALLE (SS-291), on 11 September 1944. As Officer of the Deck, upon reaching the bridge and observing that the ship was re-submerging with the upper conning tower hatch open Lieutenant Blind fought his way through a torrent of water and with complete disregard of his own safety struggled with the hatch until it was closed, although the ship had submerged at the time to a keel depth of 150 feet. His action was a major contributing factor to the saving of the ship and her crew and undoubtedly cost him his own life. His actions and conduct on this occasion was in keeping with the highest traditions of the Navy of the United States.