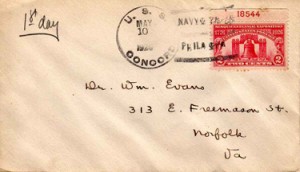 Early naval cover collectors were interested in ships because of the cancellations. Cachets were practically non existent until the late 1920’s. However the different ships and different cancels used on these ships made Navy ships interesting to a few pioneers in the hobby. One such pioneer was Dr. William Evans of Norfolk, Virginia. Covers addressed to Dr. Evans can be found from the mid to late 1920’s; my earliest cover addressed to Dr. Evans is dated March 1924.

These new cancellations were a curiosity to Dr. Evans and he wrote at least 2 articles about them in philatelic journals. In August 1927 his article appeared in the American Philatelist, titled “Battleship Cancellations.” The following year in April 1928, his article “United States Navy Cancellations” appeared in “The Southern Philatelist.” (These articles can be found on this website, go to the What is a Postmark? area in the navigation pane.) These articles describe how the good doctor was piecing together what he had learned about what ships had cancellations and what type of cancellation designs were in use down to the fact that he had learned that the first cancels were used in 1908. Dr. Evans later corresponded with Dr. Locy and no doubt provided samples and information that Dr. Locy used when creating his system of naval postmark classifications. Without pioneers like these two gentlemen, one wonders if the hobby would have ever taken off.

Also happening during this time period was a growing interesting in First Day Covers (FDC) of stamps. One of the earliest FDC’s was prepared by George Linn for the two cent Harding stamp issued in 1923. Linn added some text to the envelope and prepared one of the first cacheted FDC’s. Others involved with FDC collecting were A.C. Roessler and Erwin Strasser, both of whom would have an interest in naval covers. Perhaps Dr. Evans knew these men. At any rate, we know that Dr. Evans decided to prepare an unofficial FDC with the issue of the two cent Sesquicentennial stamp in Philadelphia on May 10, 1926. Dr. Evans was probably in town on that day and he purchased one of the new stamps, selected a plate number single and went down to the Navy Yard and took it to the cruiser USS Concord, perhaps he knew the mail clerk on this ship. He borrowed stationary from the ship (this cover has USS Concord, Care of Postmaster, New York City on the reverse) and applied his stamp. The cover was cancelled on May 10, becoming an unofficial FDC. (The official FDC’s were postmarked in Philadelphia, Boston or Washington, DC. Any other postmark location would be an “unofficial” location.)