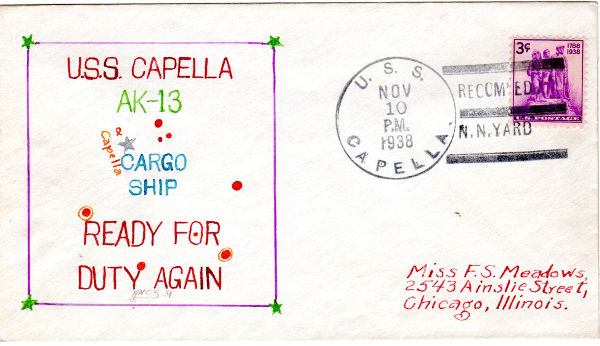 The cargo ship USS Capella was built as the SS Cormorant in 1920 and acquired by the US Navy in 1921 and renamed USS Capella. She carried cargo along the east coast and west coast for a few years, making one trip to Japan with earthquake relief supplies in 1923. She was then decommissioned in 1924.

Capella then continued carrying cargo along the east and west coasts.

During World War II she served in the Atlantic, supporting bases from Panama to Newfoundland. In 1944 she made trans Atlantic trips to Scotland and North Africa. She ended the war carrying cargo in the Mediterranean in 1945. She was decommissioned in November 1945.