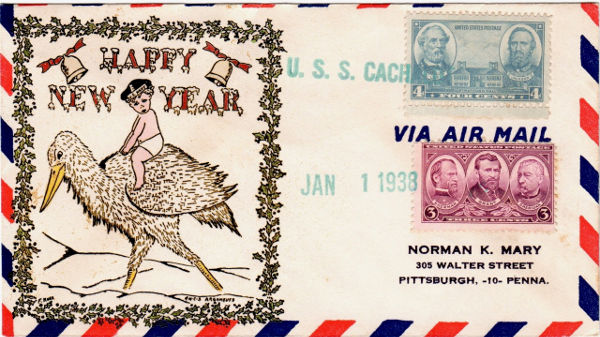 This is an attractive if odd cachet featuring a newborn sailor welcoming in the new year on the back of a stork. The cachet was sponsored by the ANCS Argonaut Crew and drawn by Frank Kuss who did cachets for a couple of years, 1937-1939. Thermographed and hand colored, it is quite colorful.

The cover was cancelled aboard the submarine USS Cachalot, SS-170, with a Type SLPb, straight line cancel. At the time, she was undergoing an overhaul in the New York Navy Yard, getting a complete engine replacement. She was stationed at Pearl Harbor on December 7, undergoing maintenance again at the time. Cachalot made 3 war patrols and then was retired to duty in the States as a training submarine.