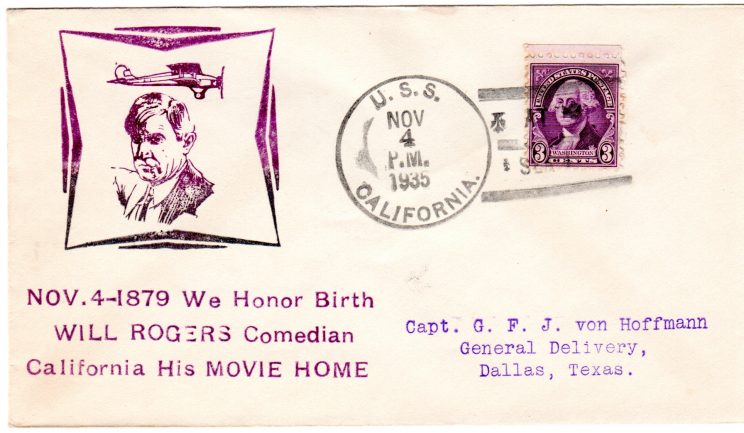 November 4 marks the birthdate of humorist and actor Will Rogers. Born in 1879, Rogers was a vaudeville actor, later a motion picture actor, a humorist and social commentator. He was a political wit and perhaps one of the most well known men of his time. He had a weekly column in The New York Times and also wrote for the Saturday Evening Post. He was an advocate for aviation. He lost is life in a airplane crash August 15, 1935 while flying with Wiley Post in Alaska.

The cover this month was cancelled November 4, 1935 aboard the battleship USS California, 2 and a half months after Rogers death. That’s an appropriate ship choice because Rogers made films in Hollywood, the first in 1918, the last in 1935. He made 48 silent films and 21 feature films and lived in California in the Los Angeles/Hollywood area.

The USS California commissioned in 1921 and had been in service 14 years at the time this cover was postmarked, while the ship was “At Sea”, not in port. She had been modernized in early 1930, making changes in armament and defensive armor.