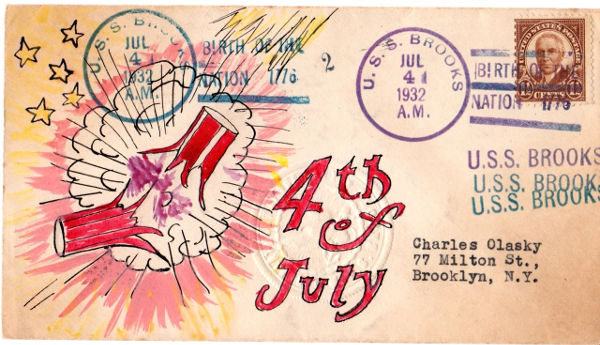 This cover was posted on board the destroyer USS Brooks in 1932, cancelled by the mail clerk Charles Olasky. Olasky was known for researching and adding killer bar slogans, such as this one, “Birth of The/Nation 1776” in this Type 5 cancel. The cover features two impressions of the canceller and also an impression of the ship seal. And the cover is addressed to Olasky himself.

The beautiful cachet was hand drawn by someone else, added at a later date, but unfortunately the design is not signed so we don’t know who did it.

Olasky produced slogans for about two years during the 1932-1934 period and he is known to have come up with over 280 different slogans. He gave up the mail clerk position to J.C. Powers in August 1933 due to his pressing Yeoman duties as the Ships Writer. He left the Brooks in 1935 and continued to serve in the Navy. He was Chief Petty Officer on the gunboat USS Luzon when scuttled in Manila Bay and he was subsequently captured on Corregidor after fighting with the Army infantry at Bataan. He survived his time in a Japanese Prisoner of War camp, was liberated in May 1945. He remained in the Navy and retired in 1958 with the rank of Captain.