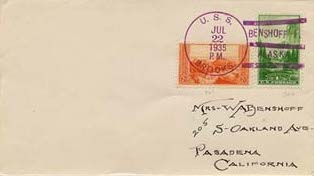 Data Sheet #12 ( A Listing of Foreign and Domestic Port Locations Appearing Within the Killer Bars of U. S. Naval Cancels) (DS#12) is currently under review and revision.  It was last updated in 1991 by Lawrence Groh, and since that time a number of unlisted port locations have been discovered.

Members who have covers with port locations not currently listed in DS#12 are encouraged to share that information with Glenn Smith (USCS 8083) via email at: highlandglenn (at) kuhncom.net.  Or by snail mail at:

The best way to share the information is with a scan (that minimizes the possibility of error by the editor), or by describing the port location as precisely as possible, i.e.: exact wording between killer bars (including misspelling(s)).  For example, the info necessary for the below example would be:  (the editor will research and provide the required coordinates)

By the way, Benshoff I/Alaska (look closely, there is an I after Benshoff) appears to be a completely fictitious place. Extensive research was conducted, including the contacting of three different offices of the state government of Alaska, and no record of a Benshoff Island exists.  The letter was addressed to a W. A. Benshoff, and the Brooks Navy Mail Clerk (NMC) was one of the most proliferate users of wording the KBs.  It appears the NMC was ‘personalizing’ a letter for one of his regular naval cover collectors.  If anyone can say with certainty where Benshoff Island may be, please also share that information with DS#12 editor Smith.