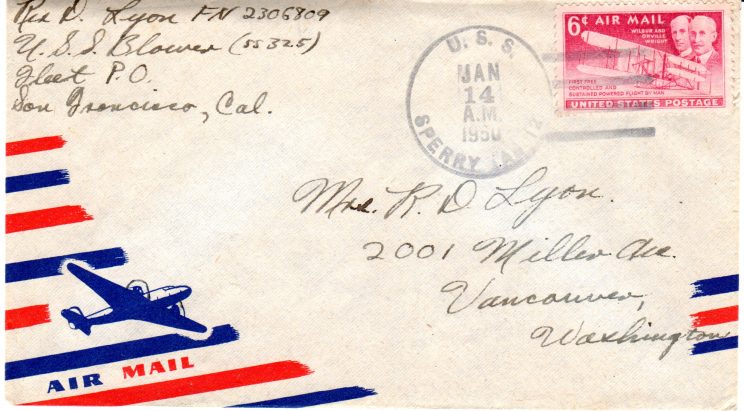 The USS Blower was commissioned August 10, 1944 and served on three war patrols before the end of World War II. After the war she served along the Pacific Coast, including 2 months duty in Alaskan waters in August and September 1948 carrying out radar and sonar exercises along the ice pack. Based in San Diego, she continued exercises along the Pacific Coast. USS Sperry was the sub tender in San Diego at that time. This cover was cancelled at that time, January 14, 1950.

In 1950 she received orders to join the Atlantic Fleet in March, sailing to Philadelphia. After undergoing repairs, she then trained a Turkish crew in September and October. On November 16, 1950 she was decommissioned and transferred to the Turkish Navy. Renamed TGC Dumlupinar, she was rammed by a Swedish cargo ship on April 4, 1953.

The sub sank within minutes although 22 crew members made it to the watertight stern torpedo room. They launched a communications buoy and while rescue attempts were made and communications established, the rescue efforts were not successful and the men perished when the oxygen ran out. They were pronounced dead on April 7.