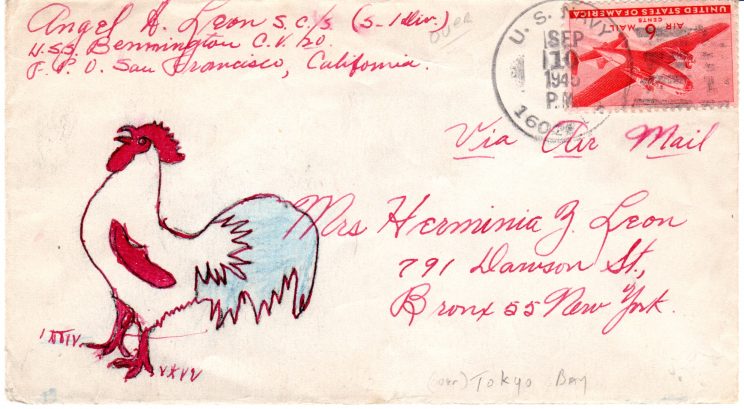 The USS Bennington was one of 24 Essex class aircraft carriers built during World War II. Commissioned in August 1944, she would join the battle of the Pacific by arriving at Pearl Harbor January 8, 1945. She would participate in strikes against Japan, Okinawa and an attack on a Japanese task force which included the battleship Yamato, sunk during that attack. She was damaged by a typhoon off Okinawa on June 5. After repairs, she participated in additional strikes on the Japanese home islands.

Within a few days of the ceremony, some of the carriers entered Tokyo Bay. Bennington came into the bay, probably on September 10. This cover was cancelled on that date with the ship’s Type 2z# cancel. On the reverse is the cachet used by Bennington during her stay in Tokyo Bay with the wording “USS Bennington, Sep 10 1945, Tokyo Bay”. She had a provisional cancel she used during her time off Tokyo with the wording “Off Tokyo”.

The sailor sending this letter, probably to his mother, had something to crow about and drew a rooster to note that!