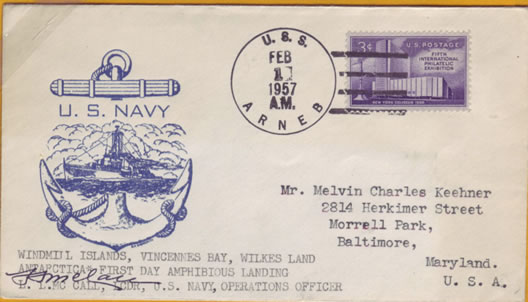 The ship’s cachet (Arctic & Antarctic Express) commemorates the ships crossing of both, the Arctic & Antarctic Circles in a single season. ARNEB provided polar logistic support from 1955 through 1963. She made eight voyages to Antarctica, but on its second deployment she participated in the first amphibious landing as recorded on this cover.

It should note that the Knox Coast Group (TG 43.6) built Wilkes IGY Station, commissioned 17 FEB 1957 and turned over the Australia on 7 FEB 1959. By 1964, the station became a fire hazard and became partially covered with snow and ice. Australia built Casey Station that became operational in 1969 and Wilkes Station was closed.