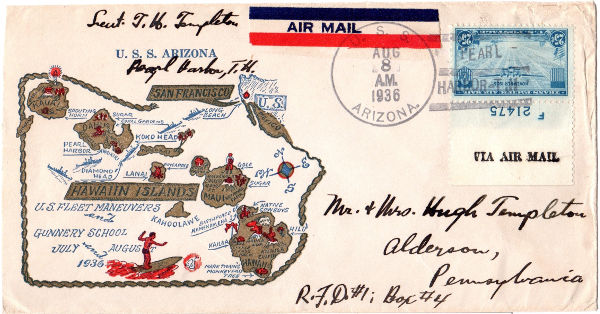 Perhaps one of the best known United States Navy ships is the battleship USS Arizona.

Covers from the ship are not particularly rare. With a large crew and being in commission 25 years, the ship generated plenty of personal and official mail. However because of the history of the battleship and having a very recognizable name, covers are sought after and often command a premium.

Arizona (BB-39) was commissioned on 17 October 1916 and barely needs any kind of introduction or historical background since so much has been written about her. She was a “super-dreadnaught” battleship. She suffered the loss of 1104 lives from the attack at Pearl Harbor on 7 December 1941. Legislation during the administrations of Presidents Eisenhower and Kennedy resulted in the designation of the wreck as a national shrine on 30 May 1962. The ship herself was designated a National Historic Landmark on 5 May 1989.

The cover this month features a cover mailed by an officer, probably to his parents, during a fleet gunnery exercise in July and August 1936. The attractive cachet features a map of the Hawaiian Island area and points to the home of the fleet in Long Beach, California.