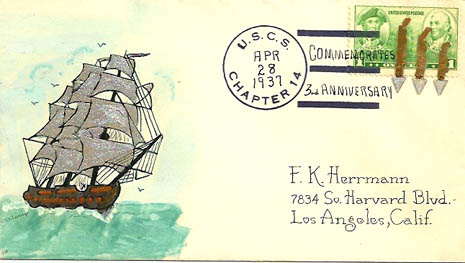 The Admiral J.M. Reeves Chapter of the USCS was formed in April 28, 1934 in the Los Angeles area. The April 1934 Log had a report from Richard Dumonte stating that a chapter name would be assigned at their first meeting, the chapter being the 14th USCS chapter. The chapter formed with W.J. Leiner (#441) as President, H.J. Lindhardt (#125) as Vice President, Ada Kleinpell (#443) as Secretary-Treasurer and Richard Dumonte (#145) as Cachet Director.

Interestingly, in the November 1934 Log, it is noted that the Reeves Chapter passed a resolution to the effect that too many cachets were being sponsored, “thereby injuring our hobby.” They requested that other chapters join in a movement to slow down the number of cachets. The article noted that one chapter had sponsored 216 cachets and had cacheted over 100,000 covers and that this was “way out of reason.” Of course it is all of these covers produced during the 1930’s that introduced many to the hobby and led to many collectors becoming USCS members, both during that period and even today. On the other hand, the chapter had a point. Those 70 odd year old covers are often worth only a few dollars each today. Many a time I’ve been contacted by someone who just acquired through inheritance or purchase many naval covers from the 1930’s convinced that they must have a small fortune on their hands. It is hard for them to understand how covers that old aren’t their ticket to a nice nest egg.

The chapter celebrated their third anniversary with a beautiful hand painted cover by Miss Catherine D. Lamp (#1207). The cover features a fantasy cancel with penned date and killer bar slogan and three hand painted birthday candles. The cachet also features the initials “DB” which may be Admiral Reeves Chapter member David Brockton Brown (#623) who was the chapter Secretary in 1935. The cover is addressed to Frank Herrmann (#441), the chapter Treasurer in 1935. I suppose the 1 cent stamp qualified for a fantasy postal rate!

The chapter also had a fourth anniversary cover, it is noted in the Cachet Makers Catalog Volume II. Were there cachets for other anniversaries?

Frank Herrmann would be the USCS Cachet Director for USCS Naval Cover Week in 1936
The Admiral Reeves Chapter would continue through the World War II period and would be reorganized in 1946 with David Brockton Browne as President but the chapter apparently folded by 1949. It was reactivated again in 1964 by Chuck French (#2603) and then again in 1972 but the chapter eventually disbanded.