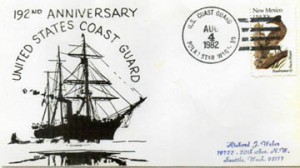 September 2006 Cover of the Month

Coast Guard Day 1982 was documented by Dick Weber, USCS # 7673 with this limited edition cover (only 18 made), posted aboard USCGC POLAR STAR on August 4, 1982. The hand-made envelope (Xerox printed) depicts Revenue Cutter BEAR in the Arctic (the original photo was taken near Point Barrow, Alaska @1921.)

A similar image appeared on the cover of Commandant’s Bulletin 32-80 (August 1980) celebrating the 190th birthday of the establishment of the United States Coast Guard. It shows the Cutter BEAR with crew and dog sled and handlers on ice flow. Cover has the initials “DW” which suggests that Dick redrew the famous photo to celebrate the 192nd birthday of America’s oldest sea-going service.

USS BEAR C.G. served on the Bering Sea Patrol (1885-1926). The cutter is best remembered for saving the Alaskan Eskimos from extinction. “Hell-Roarin’ Mike Healy (Captain, USRCS) and Doctor Shelton Jackson developed a program of importing reindeer from Siberia. In 1892, the cutter made five crossings and brought 175 deer; in 1893 she brought 345 more and established the present city of Teller, Alaska. For the next decade the cutter continued to transport deer, whose total eventually came to 1280 reindeer.

USCGC POLAR STAR was one of two 399-foot “polar” icebreakers built over 30 years ago. Commissioned on January 17, 1976, the cutter has more recently been placed into caretaker status on June 30, 2006. This means that the Coast Guard will keep it ready to return to operational service for possible future deployment to Antarctica. It only has a crew of thirty-four.

POLAR STAR had a post office aboard from May 31, 1976 (FDPS). The PugetSound Chapter #74 serviced many of their event covers aboard the Seattle based cutter during the next twenty years. The cover was posted between its deployments – AWW ’82 and Deep Freeze ’83. The cutter’s post office closed  prior to her Deep Freeze ’98 deployment and most of its philatelic requests have been dropped off at McMurdo Sound.