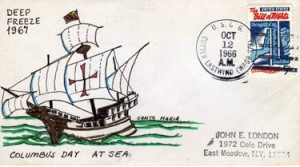 October 2006 Cover of the Month

This cover was posted aboard the icebreaker on 12 OCT 1966, while the cutter was enroute to the McMurdo area (Ross Sea Group) for Deep Freeze ’67. The cover was posted with a type 2(n+) cancel, which made its appearance during this deployment, and was returned to the collector with no cachet. The mail clerk only cacheted one cover per collector.

USCGC EASTWIND was one of four “Wind” icebreakers built during World War II. The only one not loaned to Russia, she saw Coast Guard service from June 1944 through December 1968. This was the cutter’s ninth and final deployment to the frozen continent, having first visiting Antarctica during Deep Freeze I (1955-56).