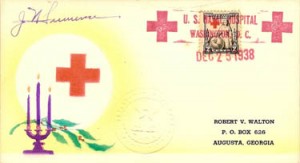 December 2007 Cover of the Month

Naval Hospital Facilities in Washington, DC: Prior to the American Civil War, Naval personnel medical needs were met in a rudimentary way at a makeshift facility that was in three separate buildings, one at the Navy Yard, one at the Marine Barracks, and one at the Government Hospital for the Insane of the Army and Navy (later St. Elizabeth’s Hospital). In 1866, a large brick building was built on Capital Hill and it served as the Naval Hospital until 1906, today it is referred to as the Old Navy Hospital. New Navy Hospital opened on Observatory Hill in 1942 and it served the Navy until Bethesda Naval Hospital (now Naval Medical Center, Bethesda) opened. New Naval Hospital then became and today remains the home of the Navy’s Bureau of Medicine and Surgery.

In Christmas 1938, naval cachet maker and pharmacist’s mate, J. N. Lawrence, was stationed at the New Naval Hospital, Washington, DC. According to the USCS Naval Cachet Maker Catalog: “Lawrence (ANCS #154) was a prolific and very good cachet maker from 1934 to 1945. He produced a wide variety of commemorative, anniversary, and patriotic cacheted envelopes – printed, thermographed, photo, and hand done for himself and jointly sponsored cacheted covers with Marshall Hall, ANCS #1, and Louis Nix, ANCS #29. Alex Hesse, ANCS #81, printed some of Lawrence’s thermographed cachets. During WWII, Lawrence issued a series of patriotic cachets identified “JNL-#”. For the most part, Lawrence did not sign his cachets; however his covers may be identified by his name on the reverse, printed, stamped, or, most often, typewritten.” This example is a hand screen-printed card from U. S Naval Hospital, Washington, DC. It has an embossed seal “Department of the Navy, USNH Washington DC. The cover is an exception; because it is signed by J. N. Lawrence is the upper left corner using the same purple ink that Lawrence used in the candelabra in the lower left of the card. Appropriately, the stamp used is the 1931 50 th Anniversary of the American Red Cross US commemorative stamp. The card was mailed to Robert V. Walton, who was a cousin by marriage of Glenn Smith (USCS-8073), and was a gift from Robert Walton’s widow, May Walton, to Glenn’s wife, Ann Marie Smith, in whose collection of Christmas cachets it now resides. 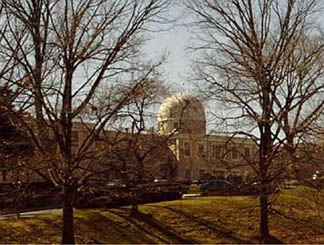