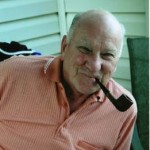 I would like to express my appreciation for this particular column in the pages of the Log. I find it refreshing and new and quite enlightening. The reader may agree? I enjoyed it so much that I thought I might throw a wrench in the screws and submit a really peculiar “history” of myself which may befuddle the reader. You see, I am not and never have been a collector or student of Naval covers and cancels, per se. Well, then, you might say, why are you bothering the editor with your words? A worthy query, indeed!

It seems that way back 1965 I read an article on the front page of Linn’s Weekly Stamp News that illustrated a cover posted aboard the USS Nautilus, a nuclear submarine that actually made it to the North Pole “UNDER” all that ice up there. I was amazed at the “news” and said WOW wouldn’t it be super to own a cover commemorating such an historic event? Yep, I got the “bug” with that reading of a newspaper and been involved for over forty years now. Sometimes a bit laid back; sometimes more active than I wished for. But, forty years of enjoyment have evolved from that one newspaper article. As I recollect, the article mentioned both the Universal Ship Cancellation Society and a polar postal history society, namely, the American Society of Polar Philatelists. Jumping on the band wagon, I signed up for both. Never regretted a moment of either decision even after 40 years have passed.

Previous to finding this article I was, generally speaking, a stamp collector. The Belgian and French Colonies had caught my eye years before. However, being an old navy man in the early 1950s I thought that this was the way to go for me. I sold off my stamps and concentrated on obtaining these fascinating pieces of mail that had a provenance in the polar regions of the world. It has been an exhilarating ride. I, perhaps, should add here that one cannot, positively, collect polar history without seeking covers from ships. There’s no other way to get to these regions and virtually 98 % of the resulting covers and interesting facets of polar history exudes naval participation. A few flight covers are the only interlude that I can come up with that add a bit of spice to one’s study.

Well, then, my history evolves from this phase of the game. Capt. Scott’s and Shackleton’s voyages to the South pole region in the early 1900s. Adm. Peary’s sojourn to the North Pole in the same time frame. Thousands of additional efforts in the ensuing century. These caught my heart along with the many ships that were involved. One phase enveloped the other, they were so intermingled.

My next forty years were thus spent providing my services to the ASPP as secretary, director, art editor and columnist until 1998. If I live to be 100 I will always be proud of these efforts to add a little to the study of polar postal history…yet, that attachment drew me so very close to the history of ships. These two studies overlap so much they are almost like Siamese twins and I would suggest that a naval collector might just find a great deal of enjoyment and historical knowledge were he/she to join both societies and follow the columns written by enthusiasts of both conversions.

My personal history tends to be rather ordinary. I have been married to my wife Mary since 1952 and we raised six children (four girls and two boys) who have provided us with a loving fifteen grandchildren and four (presently) great-grandchildren. What comes next? Don’t think I will make that, but who knows? I am retired from Verizon (which was actually Bell Telephone of PA back when I retired.) I served in the U.S. Navy from 1951 to 1955, honorably discharged with only two ribbons to wear on my chest. The Good conduct and the American Defense of which I am proud to display in a frame on my living room wall. No ribbons for bravery or anything of that sort. I served on a submarine chaser (PC-581) and USS Vulcan (AR-5) an auxiliary ship repair ship which was real neat. That latter ship could do anything from casting a ship’s bell to running an electric cable to a new coffee pot area for ships that came alongside. I’ve done quite a bit of artwork over the years such as cachets, enhancing illustrations within the two journals. I think this would be “my cup of tea” because they remain forever available to the readers of the journals. Oh yes. I enjoy building ship model kits and “copy” Norman Rockwell paintings. Just for kicks. From 1982 until 1998 I conducted a mail auction of polar material under the heading Polar Bear Philatelics. You may have received a copy?

Could anyone ask for forty years of enjoyment such as I have experienced? Yes, simply by laying out a years dues to the society which strikes one’s interest and then sending in those dues and involving ones self in the activities for the rest of one’s life. It just cannot be beat. 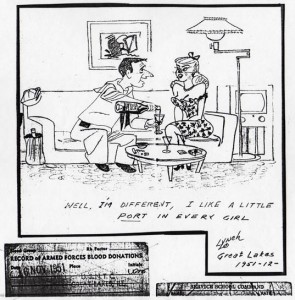 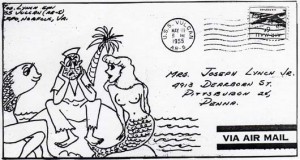