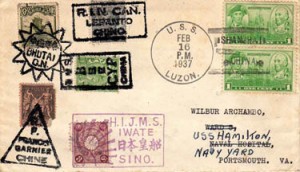 February 2008 Cover of the Month

The cover this month features a cachet that has been commented on many times through the years in the USCS Log. This cachet was first prepared by John N. Lawrence, a Chief Pharmacists Mate stationed with the 4th Marine Regimental Hospital in Shanghai, China in 1935. It was used over a 3 year period and would be used on covers cancelled aboard several different US Navy Asiatic Fleet ships. But what of the cachet? Are these actual postmarks from vessels of foreign navies? Lawrence would lead the collector to think so, though perhaps his effort was a little tongue in check. So what is to be made of the cachet?

The cachet features postage stamps of 5 countries, France, China, Japan, Italian and England. Each stamp bears a “cancellation” from a ship. In fact enclosed in the envelope is a carbon copy slip of paper noting the HMS Bee (English gunboat, Command ship), RIN Lepanto (Italian gunboat), Francis Garnier (French gunboat), HIJMS Iwate (Japanese gunboat) and Chutai (Chinese gunboat). The slip also notes that the American Navy gunboat may vary, as noted by a series of question marks. The slip notes that these are men of war ships in the Shanghai harbor and that there are various ships in the harbor at all times. However close examination of the stamps shows that they also bear previous postmarks and were removed from other envelopes and glued to the cover and then “cancelled” with the ship cancellations.

In the December issue of the Log in 1935, writer D.C. Bartely mentions these covers and cachets and notes they are the work of USCS Member #696, J.N. Lawrence. A cover postmarked aboard the USS Chester dated October 28, 1935 is illustrated. DC notes that these covers can be obtained for 20 cents (silver) by writing JN Lawrence at the Regimental Hospital. Did DC think the “cancellations” were authentic or did he just enjoy the creative cachet?
To end the suspense, the foreign ship cancellations are in fact not real, but are fanciful designs used to create an attractive cachet. These ships did not have post offices and these designs were not used aboard these ships.

JN Lawrence prepared numerous cachets while in China. He first served aboard the USS Monocacy prior to be transferred to the Regimental Hospital. He was transferred back to the States and served at the Washington Naval Hospital and I believe later at the Hawthorne Ammunition Depot. He was stationed at the Naval Hospital in San Diego during World War II. His covers were cancelled aboard the USS Monocacy, the USN Purchasing Office in Shanghai, various ships of the Asiatic Fleet and later the Naval Hospitals he was serving in. He prepared covers during the period 1934 – 1946.

As mentioned, these cachets have commented on many times in the Log. After the Bartley article in 1935, JN himself noted that he was leaving China in March 1937 and would be unable to handle covers any longer. In August 1981, Henry Sweets (USCS #6034) wrote an article describing the cachet and asked for input as he was making a list of the ships known to have covers cancelled with this cachet. The cachet was illustrated in both the May 1954 and August 1994 issues. Letters to the editor in July 1994 noted that the cachet was made from fanciful markings. In the December 1995 issue, Jackson Bosley (USCS #7488) wrote an article about the covers of J.N. Lawrence and included notes and an illustration of this cachet. Exchanges in November 2003 and December 2003 questioned what the cachet was and included answers from members. The cachet was even featured in a May 1988 issue of Linn’s Stamp News by Richard Graham (USCS #3504). Needless to say, the cachet is a popular design.

The USS Luzon (PG-47, later PR-7) was commissioned in 1928 and served as the flagship of the Yangtze River Patrol until December 1938. 6 months after this cover was cancelled, Luzon departed Shanghai after the Japanese attacked the city. She departed China November 29, 1941 when it appeared war was imminent and sailed to the Manila. On May 6, Luzon was scuttled at Corregidor to prevent capture. However the Japanese raised the ship and was renamed Karatsu. For the next 2 years she operated in enemy hands until the river gunboat was sunk in the Philippines by USS Narwhal (SS-167) March 3, 1944. This cover features Luzon’s Type 3 cancel with Shanghai/China located in the killer bars. The cover has a typewritten “3 of 3” on the reverse, in the same type style as JN’s corner card on the reverse. His address was listed as Receiving Ship, San Francisco, California. It appears JN was continuing to service these covers after he left China.

I’m writing this from a hotel in Shanghai, from my window I can just see the Huang Pu River and the Bund where the Asiatic fleet used to tie up at is just out of site behind some buildings. Somewhere down there is where JN had his rubber stamp “cancels” made 70 years ago. There are lots of ships on the river but none appear to be military.