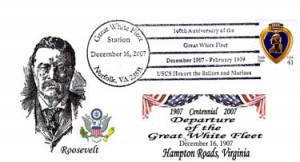 January 2012 Cover of the Month

2008 marks the 100th Anniversary of the round the world voyage of the Great White Fleet. President Theodore Roosevelt authorized the sailing of the US Navy fleet in 1909. The fleet departed Hampton Road, Virginia on December 16, 1907 and would not return until February 22, 1908. The ships were painted white for the voyage.

This voyage and the year 1908 are important to naval cover collectors; cards and covers from the voyage are very collectible and 1908 also marked the year that post offices were opened aboard US Navy ships.

USCS members Rich Hoffner, Greg Ciesielski and Phil Schreiber have developed commemorative cancellations for 2007-2009 that will mark the anniversary of milestones in the Great White Fleet voyage. This web site has a listing of those cancels and provides information on where to send for the cancels.

USCS member Greg Mews (#11556) is one member that plans to prepare covers with these cancels and he started with the cancel marking the departure of the fleet. (This cancel was prepared by Rich and Greg Ciesielski.) Greg uses Print Shop Delux 20 for developing his cachets. Envelopes are printed on an Epson printer that has a top-rear feeder so that paper and envelopes run straight through the printer. Greg notes that he is spending time researching the GWF and using the internet to find pictures and correct historical information so that he can prepare cachets to be used with the other cancels. Greg’s story is similar to that of many USCS members, he had an interest in covers while in high school but then lost interest during college and career but has now found a renewed interest. Also, like many members, he sells on eBay and finds that there are collectors around the world looking for US naval covers.

I encourage you to prepare cachets to commemorate the Great White Fleet. If you will send me a cover or a scan, we’ll create a section on the web site to show those covers. You may send me scans at shaymur@flash.net.