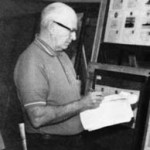 Many of us who are collecting naval covers today use the “Catalog of United States Naval Postmarks” as their reference and bible for information about the cancels a particular ship may have had and when the ship had a post office or was in commission. The most recent edition of this catalog, the Fifth, was published in 1997. Do you realize that the first catalog to be published listing naval cancels was produced 75 years ago? Joseph Hale served as the editor for that edition.

Joe was a charter member of the USCS, member #40, joining in 1932. Joe was born in 1900. He helped found the Old Ironsides Chapter #1 in 1933 with 6 other local members in the Boston area, including Everett Wallster. Everett and Joe combined forces in 1934 to produce the “Handbook of Naval Postmarks”, copyrighted in 1934 with the First Edition printing in December 1934.

The catalog was dedicated to the memory of Francis Locy, edited by Joe Hale. It contains a description of the Locy System of Cancel Classification with illustrations of each type and variety as well as a checklist of ships and known cancels. It must have been a wonderful resource for collectors in 1934 and the inclusion of a check list gave collectors a goal. Joe was flooded with letters and revisions to the listings. My autographed copy has its place in my reference library.

5 years later Joe combined forces with Charles Emerson (#809) to produce the Second Edition of the “Handbook of Naval Postmarks.” This edition still contained a description of the Locy System but was shown in less detail. This edition was now in the form of an alphabetical listing of Navy ships listing their known cancels types, much as our current edition is laid out. This edition also priced the different cancels per ship. While a very nice catalog, (May 1939), it would be outdated within a few years as the US Navy began a huge build up of ships.

Joe worked with John Gill (#39) and Joseph Frayne (#2279) after the war to publish the Third Edition. Eventually the USCS took over the publishing of the Catalog.

Joe provided another great service to collectors and the hobby by stepping up as USCS Log editor during the WWII years. In April 1941 the Log editor announced that his National Guard unit was called to active duty. Joe stepped up and with help from others in the Boston area, resumed publication of the Log in January 1942. Joe had been a USCS Director in 1940 and was 1st Vice President in 1941 when President Chester Knowles was called back to active Naval service. Joe became Acting President and continued to serve as President in 1942 though there is no record of the election results. The war years significantly reduced the membership and Joe continued to produce the Log throughout the war years, the only Navy Cover publication to continue during this period. Bertha Thompson (#1247) was elected President in late 1942 leaving Joe to continue with the Log. Joe served again as Director in 1946 but never held USCS office after that time. His efforts during the war years literally kept the Society from folding.

Joe wrote for the Log over the years, as well as for other publications. He helped organized several meetings and conventions in the Boston area, including the 1941 and 1958 USCS conventions. The accompanying photo was taken at the 1968 USCS Convention and shows Joe judging an exhibit.

Joe is a member of the USCS Hall of Fame.

Joe was married to wife Grace. He passed away on October 17, 1991 after a long bout with Lou Gehrig’s disease.