Forwarded Mail Chasing a Sailor in 1941 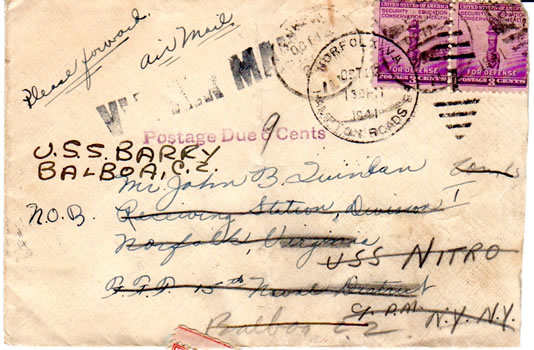 On October 4, 1941, a female student at Eureka College in Illinois mailed an air mail letter to a sailor in the Navy. The sailor may have been a boy friend, the reverse indicates that it was “SWAK”, Sealed With A Kiss. And she wanted her letter to reach him quickly, noting also “SMRLH”, Sailors (Soldiers) Mail Rush Like Hell. The letter was addressed to the Receiving Station Division I, Norfolk, Virginia but she also noted in the address, “FFI 15th Naval District”, meaning “For Further Information.” She must have known or had a hunch that the sailor might no longer be at Norfolk. The 6¢ franking paid the domestic air mail rate.

The letter was received at Norfolk and it was noted as “N.O.B.”, meaning “Not On Board” or else “Naval Operating Base”, to clarify the Norfolk address, and forwarded to the USS NITRO, AE-2, home ported at Norfolk. The letter was cancelled with a Norfolk, VA-Hampton Roads cancel on October 22.

NITRO was an ammunition ship that performed ammunition, men and supply carrying duties. She served primarily on the east coast but she made trips to Pearl Harbor, Manila and even a trip to Shanghai.

Once delivered to the NITRO, it was found the sailor was not on the ship and once again it was forwarded, this time to a destination in Balboa, Canal Zone. (The destination name can’t be made out.) The letter was canceled aboard USS NITRO on October 31 with the ship’s Type 3z(TTT) cancel on the reverse and a rubber stamp applied to the face noting “Postage Due 9 Cents”, 15¢ being the air mail rate between the continental US and the Canal Zone, 6¢ having already been paid by the sender. The use of war time “z” cancels had begun as early as late spring 1941 for ships in the Atlantic and Caribbean.

Balboa was home of the 15th Naval District, the area established by the Atlantic Entrance and the Pacific Entrance of the Panama Canal, showing the notation made by the sender must have been based on some knowledge of where the sailor was going. Balboa is located at the Pacific entrance to the Canal.

The letter made it to the unknown destination at Balboa and once again forwarded, this time to the destroyer USS BARRY, DD-248, receiving a Balboa, Canal Zone machine cancel on the reverse. BARRY was a 4 piper destroyer assigned to the Canal Zone in October 1940. One month after this letter was delivered, the United States was at war and BARRY assumed convoy escort duty and anti submarine duties in the Atlantic.

At this point the letter finally found the intended recipient. The BARRY postal clerk affixed 9¢ in postage due stamps to the reverse, postmarking them November 10, 1941. The recipient would have paid the 9¢ and received his letter. Given the letter was delivered to 4 destinations and made the trip from Illinois to the Canal Zone in about 5 weeks, maybe that qualifies for meeting the “SMRLH” request.