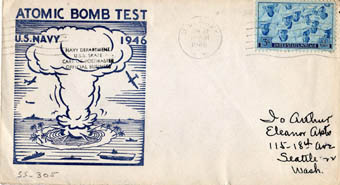 The cover this month marks Operations Crossroads, the series of atomic bomb tests at Bikini Atoll in 1946. Two weapons would be used to study the effects of nuclear weapons on ships, equipment and material. Vice Admiral W. H. P. Blandy, USN, was in command of Joint Task Force One. In the July 1, 1946 edition of “All Hands”, Admiral Blandy described the main purpose of the test to be determining the degree of damage different vessels would suffer at varying distances from the point of detonation. This knowledge would provide the Navy the basis for possible required changes in ship design, tactical formations at sea, anchoring distances in port and the number and location of operating bases and repair yards and the strategic disposition of ships. He described the secondary purposes of the test as being to test the effect of nuclear weapons on aircraft and living beings, to gain information regarding the relative value of atomic bomb attacks against naval vessels and to gain information of scientific value on phenomena accompanying atomic explosions.

A vast assortment of ships was assembled for the tests, with 77 vessels to serve as targets for the first test. Targets would include battleships, cruisers, aircraft carriers, destroyers, submarines and other smaller craft. The battleship USS Nevada, painted in red lead, would serve as the target with the other ships concentrated within a 1000′ radius of the Nevada. The first test, designated as Able Test, would be an air burst with a yield of 23 kilotons on July 1, 1946.

The cover this month features a generic Atomic Bomb Test cachet as well as the USS Skate’s corner card stamp that would normally be applied on correspondence. Since Skate did not have a post office at this time, the Type 7z cancel dated June 21, 1946 is either from another ship or shore station.

USS Skate, SS-305, was built at the Mare Island Naval Shipyard and commissioned April 15, 1943. Skate made 7 war patrols and had just started on her eighth patrol when World War II ended. During the Able Test, the first of the two tests during Operation Crossroads, on July 1, Skate’s superstructure was heavily damaged however her pressure hull was not damaged. After the tests, Skate was selected to be used to for research of the test results and was towed to Kwajalein by ATR-40 and then towed to Pearl Harbor by the sub tender USS Fulton where she was moored in an isolated berth. On October 11, 1946, USS Clamp towed the Skate to Mare Island. There the submarine was inspected and finally decommissioned on December 11. USS Skate was disposed of by sinking off the California coast on October 4, 1948 in 515 fathoms of water.

The cover provides a record of the USS Skate being present at Operation Crossroads.