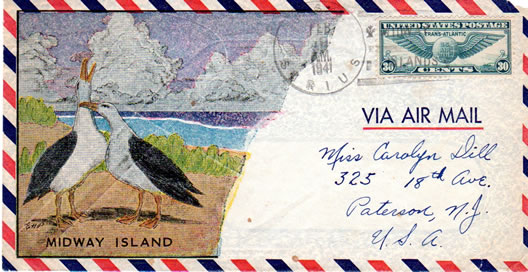 In September 1940 the first of the 3rd Marine Defense Battalion was moved to Midway with a small contingent numbering around 150 officers and men, transported by the USS SIrius. A second and smaller group was moved to Midway in January 1941. Around that same time, the Chief of Naval Operations directed that the entire battalion be concentrated on Midway. On February 9, 1941, the remainder of the battalion, around 600 officers and men, boarded cargo ship USS Antares, along with their equipment and set sail for Midway, arriving February 14.

During this period, supply ship USS Sirius was engaged in bringing supplies to Midway and Wake Islands. She was at Midway on February 19. The USS Antares was still at Midway and sailor C.P. Jones, stationed aboard Antares, mailed this letter to the states. (The corner card on the reverse of the cover is C.P. Jones, USS Antares, c/o Postmaster, San Pedro, Calif.) Perhaps Carolyn Dill was a girlfriend that he missed, he used air mail service, 30 cents per half ounce. This was an unpublished postal rate although there are enough examples remaining to know that this rate was in use.

The Antares had an operating post office at this time; it is unclear why the letter was cancelled aboard the Sirius. The Sirius postmark clearly shows “Midway/Islands” in the killer bars.