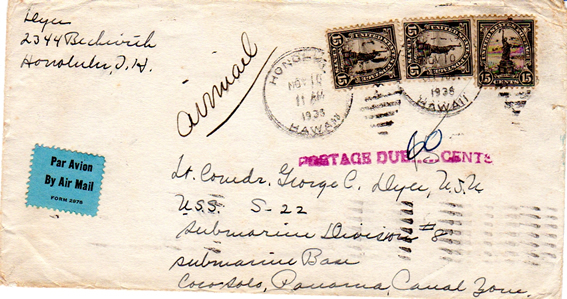 A sender in Hawaii sent this rather heavy air mail envelope from Honolulu, Hawaii in 1938 to George Dyer, Commanding Officer Sub Division 8 aboard the submarine, USS S-22 in the Canal Zone. Air mail service between these two points was achieved when the Pan Am Clipper began service between the mainland from Alameda, California to Honolulu. This service was started on November 22, 1935 with a cost of 25¢ per half ounce. On April 21, 1937 this rate had dropped to only 20¢ per half ounce.

Service from the mainland to the Canal Zone had started on February 4, 1929, from Miami. The rate for this route was originally a 25¢ surcharge in addition to surface postage, then dropped to a total cost of 25¢ per ounce in March 1929 followed by a reduction to 20¢ per half ounce in 1930 and 15¢ per half ounce December 1, 1937. (Who remembers when postage rates would go down and not up?)

At the same time, a rate was established for mail between Hawaii and the Canal Zone, 35¢ per half ounce. (Obtained by adding together the rates from Hawaii to the mainland (20¢) and the route from the mainland to the Canal Zone (15¢).)

When the sender sent this envelope, the 35¢ has in effect and the sender applied that postage, and a little bit more, with three Statue of Liberty (Scott ) stamps for 45¢. However it must have weighed one and a half ounce as the post office marked it as Postage due 60¢, for a total of $1.05 or triple rate. (Not a small sum in 1938.)

The Honolulu postmark was applied November 10, 11 AM. The mail would have been sent via the Pan Am Clipper to Alameda, and then transferred to a series of flights moving the mail to Cristobal in the Canal Zone, arriving November 15 at 6 PM. That is pretty good service.

The recipient, George Carroll Dyer, originally served on submarines, commanded Sub Division 8 and later served on the USS Arizona, USS Indianapolis, USS Astoria and he commanded a cruiser division during the Korean War, retiring as a Vice Admiral in 1955.