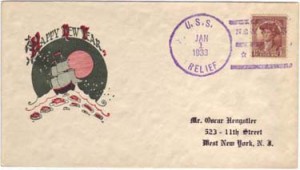 Sherman manufactured two cancels (type A & B) that were used with sixteen ship names in the dial (1932-33). Recently discovered unlisted type B cancel (CD-1a) with the name RELIEF and date 1 JAN 1933. The killer bars have wording NEW YEAR/ 1933.