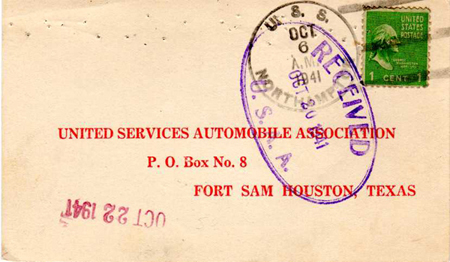 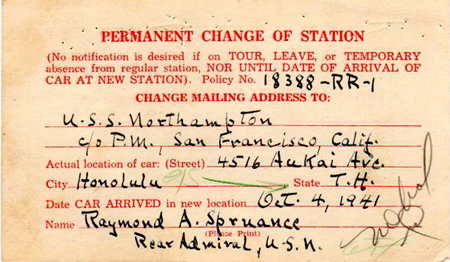 At first glance it looks like a simple post card with a Type 3 USS Northampton cancel dated October 6, 1941. There is an overstamped “Received” mark covering the cancel and a series of staple holes along the top of the card. Nothing to get excited about and something that wouldn’t normally qualify for a second look. But turning the card over increases the interest in this card.

The reverse of the card shows that this card served as a change of address notification from the holder of an auto insurance policy. The policyholder was none other than Rear Admiral Raymond A. Spruance. Spruance had just changed commands from the Caribbean Sea Frontier in Puerto Rico to take command of Cruiser Division Five at Pearl Harbor in September 1941. Spruance, his wife and daughter had arrived in Hawaii aboard the SS Lurline in mid-September from San Francisco. Spruance raised his flag aboard the USS Northhampton, the flag ship in the division which also contained the cruisers Pensacola, Salt Lake City and Chester. Spruance had wanted to command a battleship division but he certainly preferred a seagoing command to a staff position.

Spruance commanded Cruiser Division 5 under the command of Admiral Halsey in Task Force 16 that participated in early carrier raids on Japanese bases during the first half of 1942. Spruance’s big opportunity came when he took over command of Task Force 16 for an ailing Halsey with the carriers USS Enterprise and Hornet for what would become the Battle of Midway. When Halsey resumed command of the Task Force, Spruance became Chief of Staff to Admiral Nimitz. In mid-1943 he would be promoted to Vice Admiral and become Deputy Commander in Chief. In August he was given command of the Central Pacific Force with the Fifth Fleet. In the summer of 1944 Halsey’s Third Fleet merged with the Fifth Fleet and Halsey and Spruance would alternate command, changing the name of the merged fleet to match the commander. Spruance directed the campaigns during the war that captured the Gilbert Islands, Mashall Islands, Marianas, Iwo Jima and Okinawa.

After the war, Spruance became Commander in Chief of the Pacific Fleet and then ended his career in 1948 as President of the Naval War College. Spruance never received promotion to Fleet Admiral as did Halsey, though Congress passed an act that granted him full Admiral’s pay once he retired until death. Spruance is buried alongside his wife, Fleet Admiral Nimitz, Admiral Richmond Turner and Admiral Charles Lockwood at the Golden Gate National Cemetery in California.