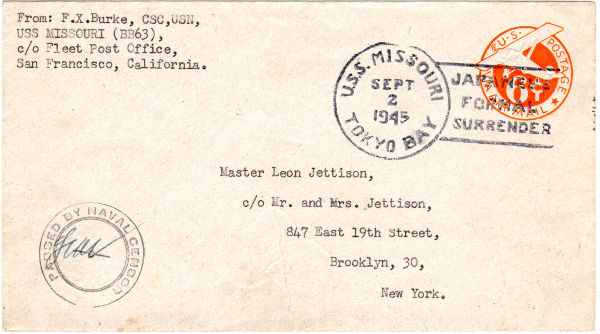 This is the 75th anniversary of VJ-Day, September 2, 1945. On that date, the surrender papers ending the war with Japan were signed in Tokyo Bay.

The Allied Fleet gathered in Tokyo Bay for the ceremony. The actual signing ceremony was held aboard the battleship USS Missouri, with General Douglas MacArthur presiding. US Navy ships brought the Japanese delegation to the Missouri. The signing ceremony was simple and short. MacArthur spoke a few words and it was over. At that point US Navy and US Army Air Force airplanes flew over in mass. Together with the ships gathered in Tokyo Bay, it was an impressive show of force.

Many Navy ships created special cancellations or cachets to mark the occasion. The USS Missouri had two special cancels prepared. This is one of them, a Type F cancel, postmarking a letter mailed from a crewman on that date.