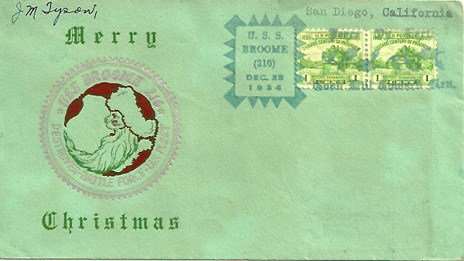 A Merry Christmas from the USS Broome in 1934, part of the Destroyer Battle Force in the Pacific.

Broome was based on the west coast at that time, in San Diego as indicated by the typewritten location above the stamps. Broome used a number of fancy cancels and this was a special cancellation used for Christmas day in 1934.

Sometimes when we get covers, they include an old piece of paper for a filler card. This particular cover has an interesting filler card, interesting letter and even a newspaper clipping from The Western Stamp Collector, written by Desmond Jagyi. The article notes that the cachet was prepared by Alex Hesse Jr. Alex was a USCS member, H-163, joining in 1933. He had a long career as a cover sponsor. He would leave USCS and move to the ANCS in 1935 and would serve as their President before returning to USCS where he served as Vice President.

The newspaper article notes that there were 227 covers with this cachet.

The filler card is a note from Alex to cover subscribers detailing which covers the subscriber would be receiving. Of even more interest is the letter, also from Alex to the recipient of this cover. Apparently the recipient, a Mr. Jackson, had not provided covers for Alex’s cover service and missed out on the Christmas cover. Alex sends Mr. Jackson the cover, noting that it is a “very neat cachet” and that he thinks “it worth more than a dime…. (perhaps) twenty cents.” Alex requests that Mr. Jackson send an additional dime to him.

Alex provided a great service for collectors and produced some great cachets. 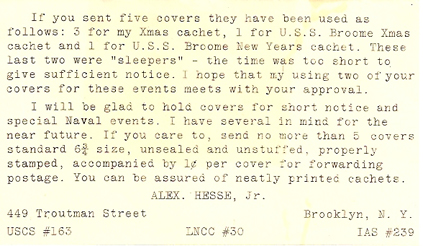 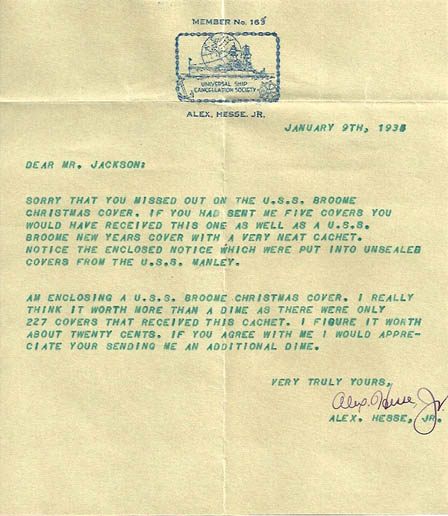