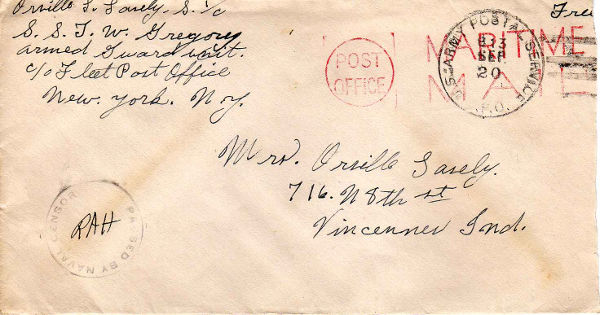 This month we have a cover from a merchant ship, the SS Thomas W Gregory. This was a Liberty ship, launched October 6, 1943 and delivered for service on the 19th. The keel laying was August 20, 1943 at the Todd Houston Shipbuilding Corporation. It was a different time, we were at war, and we needed ships and needed them quickly. And the Liberty ships were designed to be pumped out assembly line style. The American Range Liberty Line operated the ship.

Liberty ships carried armament but the civilian merchant marine crew did not operate this. It was US Navy Armed Guard sailors that crewed these ships as the gunners and radio operators. Crew size varied by ship size but a typical complement was an Ensign and around 20 sailors. The Liberty ships were in service worldwide; Atlantic, Pacific, Indian Oceans and the Mediterranean and Caribbean. Cargo needed to be moved to support the war effort at home and supplies and equipment needed to be moved to where the troops were.

The cover this month is from a Seaman 1st Class, serving as part of the Armed Guard crew aboard the SS Thomas W. Gregory. But where was she? The red Maritime Mail indicates being in the English mail stream, a common mute cancel that doesn’t indicate place or time. However the Army Postal Service cancel tells a story with APO 813, dated September 20. APO 813 was located at the Victoria Barracks, Belfast, Northern Ireland effective January 29, 1942 until moved to Le Havre, France June 18, 1945.

Since the ship went into service in August 1943, the cancel could be from 1943, 1944 or 1945. By September 20, 1945, Armed Guard units would have started to be removed from the merchant ships. As a collector of Armed Guard covers, I know that Armed Guard covers from 1942 and 1943 are much scarcer than covers from 1944 or 1945. I’d put my money on this being a 1944 cover, placing the ship at Belfast, but it would take some research in the National Archives to confirm that.