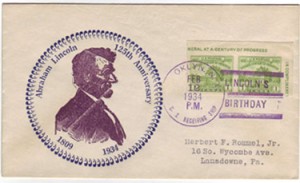 Lincoln’s Birthday was never a federal holiday, but it was a legal holiday in several states (Connecticut, California, Illinois, Indiana, Missouri, New Jersey & New York.) Abraham Lincoln was born on February 12, 1809. A self-trained lawyer, Lincoln became the 16th President of the United States in March 1861 and preserved the Union throughout the Civil War. He was assassinated on Good Friday (April 14th) 1865 by actor John Wilkes Booth at the Ford Theatre, Washington D.C.

During the 1930s, many a sponsor produced cachets for holidays and other events. STANLOS cover service produced this cover to commemorate Abraham Lincoln’s Birthday that was posted aboard U.S. Receiving Ship, Brooklyn (ex- USS SEATTLE) on February 12, 1934. Dean Dunn was mail clerk aboard the old cruiser until August 1935; prior to that he served aboard USS DOLPHIN .

STANLOS’ cachet director was John von Losberg (RCD #52), while its printer was Mike Sanders (RCD #156). Both were early members of the ANCS’ Brooklyn Crew along with Ed Barnes, Ed Duncan, Alex Hesse, George Sadworth & Lou Weigand. Von Losberg would join the USCS in December 1940, while Mike Sanders joined and tried to re-activate the Teddy Roosevelt Chapter in January 1942.

Armored Cruiser No. 11 was launched at New York Shipbuilding Corp, Camden NJ in March 1905. Commissioned USS WASHINGTON on August 7, 1905, the cruiser’s first assignment was to escort President Teddy Roosevelt on his inspection cruise of the Panama Canal aboard USS LOUISIANA. She spent most of her career roaming the seven seas, including duty as Flagship, Destroyer Force during World War I. She was renamed SEATTLE on November 6, 1916.

Following duty as the Flagship, U.S. Fleet, she was laid up at the Brooklyn Navy Yard, where she was to become home to thousands of sailors from September 29, 1927 through June 29, 1946. In August 1941, SEATTLE & CAMDEN were moved to Pier 92 (Hudson River) because of limited space at the Navy Yard.