This obituary first appeared in the September 1981 issue of the USCS Log:

John was born in 1914 and served in World War II as a Sergeant in Army Intelligence G-2. He saw service in England, France and Germany. After his discharge from the Army, he entered the Railway Mail Service and retired in 1971.

John was a Charter Member of the USCS and one of the founders of “Old Ironsides Chapter #1”. He was one of the early sponsors of First Day Covers and his early Covers are much sought after by first day cover specialists. He was very active in sponsoring naval cover cachets during the 30’s and 40’s. He went into great detail in designing these cachets and consulted blueprints of the ships to have every detail as correct as possible.

Together with Joe Hale, he conceived the idea of the original “Handbook of Naval Postmarks” and did all the early art work and helped with the research on all the early editions of the Handbook.

He is survived by his wife, Anna M. (Phillips), five children and four grandchildren.”

The picture used for this article appeared in the September 1981 USCS Log.

As noted in the article, John was responsible for the illustrations first used in the 1934 “Handbook of Naval Postmarks.” He received credit with the notation “The Postmarks illustrated are reproduced in actual size from drawings by John Gill.” In fact his work would be used in all editions of the catalog, and the 5th Edition of the “Catalog of United States Naval Postmarks” published in 1997 notes that illustrations provided by the late John Gill still guide us today.

Also noted in the article were John’s cachets. The “Naval Cover Cachet Makers Catalog” lists John as producing cachets 1934-1950. I believe his work continued past 1950 as he is credited with cachets produced by the Old Ironsides Chapter in 1978 marking the 70th anniversary of US Naval Postal Services. He sponsored and designed cachets used aboard Old Ironsides during her cruise of the East and West coasts in 1931-1934.

Dave Kent’s article “Naval Cover Fakes, Forgeries and Frauds, Part II” appearing in the March 2008 USCS Log details John’s designing cancels that he used on ships that had postal facilities and even on ships that did not have a postal facility. The illustration for this article shows this cancel (design CD-2 in the Catalog of United States Naval Postmarks) and it also shows a John Gill designed cachet, showing, with some accuracy, the USS Monaghan.

John was one of our early members that contributed in many ways to the hobby and to the success of the USCS. John enjoyed the hobby and we enjoy his efforts today. 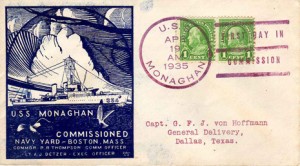