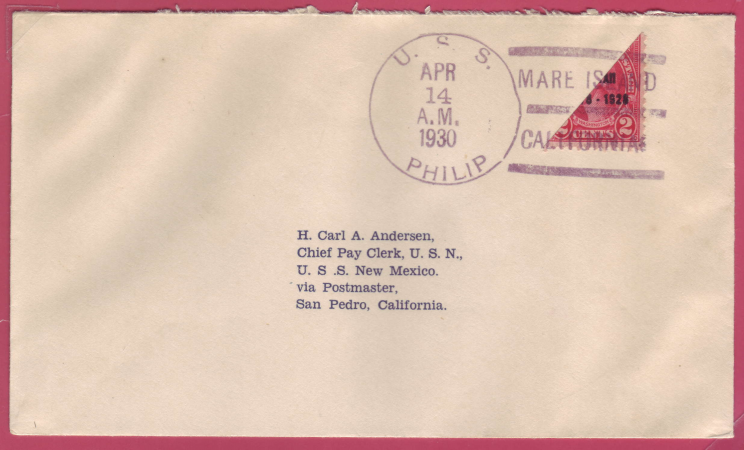 Cover franked with a bisected 2 cents Washington stamp, overprinted with words that commemorate the Hawaiian Sesquicentennial. Note: a “bisect” is a stamp cut in half and used on mail at half its original face value. Its posted aboard USS PHILIP on 14 APR 1930 with words MARE ISLAND/ CALIFORNIA between killers. Note: no indication of “postage due” because the bisect stamp represented one cent. No markings or postmarks on reverse.

Addressee, Chief Pay Clerk Andersen, U.S. Navy was a collector and member of the North Bay Stamp Club and attended its meeting on March 12, 1930. A guest speaker, H.F, Bowler, a well known authority on stamps of China and gave a short and interesting talk on his specialty and exhibited a few covers, bisects, etc of that interesting country.

Who has the other cover, addressed to Andersen with the left half of the 2 cent Washington stamp, overprinted HAWA/ 177 on the stamp?