Navy Day and the USS Portland

USS PORTLAND (CA-33), called “Sweet Pea” by her crew, was given a unique and special honor for Navy Day 1945. She was ordered home from the Pacific Fleet to participate in Navy Day celebrations at her namesake city, Portland, Maine. What a wonderful opportunity for the citizens of the Portland to celebrate the end of World War II by hosting the ship named for their city. The author knows of only 6 other ships that were so ordered to the location for which they were named. 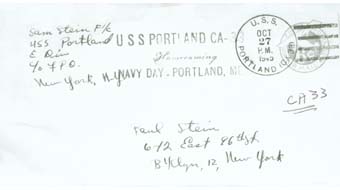 Townspeople turned out in droves and the official delegation to the ship included the Governor of Maine, elected city officials and the parents of the only sailor who was born in Portland. We will discuss more of this visit later. However, before I go any further I want to thank USCS member Sam Stein for much of the Navy Day information this article contains.

USS PORTLAND was an INDIANAPOLIS class heavy Cruiser designed almost to the edge of the restrictions established by the treaties signed during the “Washington Conference on the Limitations of Armaments.” She was 9800 tons versus a maximum allowed of 10000 tons and carried 9 of the largest guns permitted, 8 inch, 55 caliber. This class was the third cruiser class built under the treaty limitations. All nations including the United States were building numerous designs trying to find one that provided the correct mix of armament, speed and power. The first United States post treaty class was the PENSACOLA class followed by the CHESTER class. Numerous weight saving features were employed for these three classes to stay under the 10000 ton limit, significant amounts of welding was used, aluminum fittings replaced steel and simple pole masts were part of the designs. The first two classes were initially inclined to roll at low speeds. The design of the INDIANAPOLIS class attempted to resolve roll stability through improved weight distribution. PORTLAND was laid down at Bethlehem Steel at Quincy, MA on 17 February 1930 and launched on 21 May 1932. She was commissioned and had her first day of Postal Service on 23 February 1933. She had a peacetime compliment of 848, was 610 ‘ long and a rated speed of 32.7 knots.

Her first visit to Portland was during August 1934 when she accepted the customary gift of silver service. Due to prohibition concerns and a depression era economy no public funds were used in the purchase. Instead a public subscription from residents, businesses and service clubs raised sufficient funds to purchase the engraved silver service. PORTLAND joined the Pacific Fleet where she served until decommissioning after World War II. PORTLAND’s war record was exemplary. She was in 32 major engagements and earned 16 battle stars. She had her stern almost blown off during the naval battle of Guadalcanal. She was given an extreme high honor as the ship selected to accept the surrender of the Japanese forces on Truk and other Pacific Islands on 2 September 1945.

She returned to the states for the Portland, Maine, Navy Day celebration. Newspaper accounts of the day report “Harbor whistles shrilled, a Navy band blasted forth and a crowd of several hundred, standing in a drenching rain, shouted a merry welcome as tugboats guided the cruiser to its berth”. USS WALSH trailed the PORTLAND into the harbor and they both joined four other ships already docked for the celebration, FOGG, RODMAN, BORDELON, WYOMING. 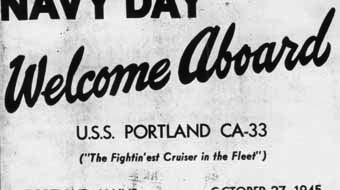 Prior to docking the 33 member greeting party came aboard by climbing a sea ladder. First piped aboard was Governor Horace Hildreth followed by city council chairman Libby, the parents of PORTLAND seaman first Class Charles Hall, Mrs. W.C. Doughty, who as 12 year old Mary Elizabeth Brooks christened the PORTLAND in 1932, and then the others. Chairman Libby presented the ship with a key to the city and stated “We are proud to have a ship named after this city and prouder still of your World War II record”. Captain Thackrey accepted the key “as an outward display of the deep feeling each and everyone of you has for the greatest Navy in the history of the world”. Seaman Hall was greeted with hugs and kisses from his parents and endured his mother’s all too common comment “Son, how you have lost weight”! USCS member Sam Stein remembers 27 October 1945 as a great day. “We couldn’t put our hands in our pockets for payment of anything. As soon as it was learned that we were from the PORTLAND, drinks were on the house”.

Sailors from the USS PORTLAND have a web page (www.ussportland.org) and conduct a yearly convention. For more information see the USCS LOG, V. 63, No 12 (December 1996), page 15, for an article by David Bernstein about the Japanese Surrender at Truk. The entry for PORTLAND in the Catalog of United States Naval Postmarks has 19 postmarks listed. She decommissioned on 3 June 1946, was struck on 1 May 1959 and then sold.