USCS membership response to the 2005 theme of Navy Day 45 has been very rewarding. John Young supplied an excellent two-part article about Navy Days prior to 1945 (see the March and April 2005 LOGs). Plus I’ve received a number of copied covers from the massive worldwide Navy Day 45 celebration. Equally exciting were the receipt of some very early Navy Day material. Please keep up the search in dealer boxes and your collections, send what ever interesting material you find to the above. The topic of this article is the early Navy Day items.

John Young recounted the creation of Navy Day in 1922 by the Navy League in Part I of his March 2005 LOG, page 22. I would add only that to completely appreciate this act one must recognize it was done in the same time frame as the “Washington Conference on the Limitation of Armaments” which ended on 6 February 1922 with the signing of 7 limitation treaties and 13 resolutions. The Navy League was not against the treaties but was very concerned about the prevailing attitude in the country that the treaties solved the entire world’s problems. The League was worried about proposed staffing levels in congress that were a fraction of that allowed by the treaty. The League concluded it needed to popularize the Navy, which it did with a spirited campaign of editorial material, letter writing and speeches. League members were familiar with national Navy themed celebrations in both Germany and England. With this knowledge and the desire to turn the public sentiment the impetus to create Navy Day in the USA was born. The Navy league’s proposal was to have a day “on which the people of the country would be reminded, through the concerted efforts of numerous patriotic organizations, of the Navy and its value to them”.

The first Navy Day was wildly successful. Twenty-eight governors and twenty-seven mayors of major cities issued proclamations. Thousands visited ships or naval institutions. Presumably millions were exposed to Navy Day in one way or another. The model for all future Navy Days was established. Have large amounts of advance publicity, obtain proclamations by elected officials, have speeches by Naval Officers and supporters and organize the ever-popular open house visits of the public to bases and ships.

We have yet to uncover any philatelic material from that first year, 1922, however Navy Day themed material does begin to appear in 1923. Frank Hoak supplied a second circular marking dated 18 October 1923 from the USS NORTH DAKOTA (BB-29) shown below. Recall John Young refers to this marking in his March article. However as figure 1 is from an actual cover and not a recreation we can see that the N in Navy is correctly oriented. Frank also supplied three other covers. 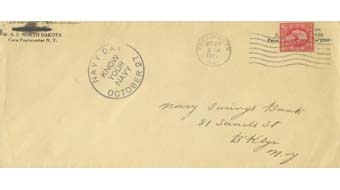 The cover below from USS JAMES K. PAULING (DD-238) with a three line marking “NAVY DAY, OCTOBER 27, 1923, VISIT THE NAVAL BASE AND NAVY YARD”. The October 13 Norfolk, VA, CDS gives the presumed location. 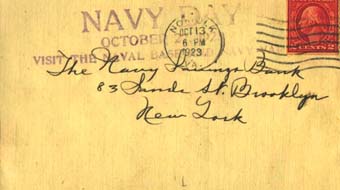 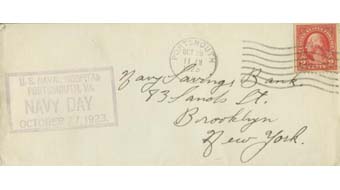 The cover below has a two line marking with “VISIT YOUR NAVY YARD, NAVY DAY, OCT.27” applied to a cover with USS COLORADO (BB-45) cc with a Brooklyn, NY, CDS cancel dated October 22. Four covers with four different Navy Day markings from just the second year certainly demonstrate the appeal and excitement surrounding the celebration. 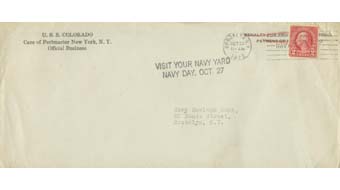 This cover has a type 3r from USS ROBIN (AM-3) from my collection that shows an early Navy Day reference in the Killer Bars. 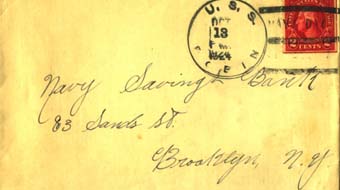 The circular marking from 1923 was used again in 1924. Frank Perreault provided the cover below, which is an October 18 cover with a Portsmouth, VA, CDS. 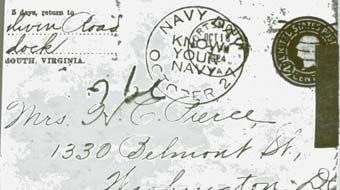 We know very little about what actually happened in these first few years of Navy Day. The best documents are evidently area newspapers that reported on the events. Official Navy League archives are scant, however some material, the personal papers of Walter B. Howe, an early Navy League leader, was located at the Naval War College library in Providence, RI. These papers include an extensive summary of Navy Day 1924 and provide insight on the planning and organization of early Navy Days by the League and the Navy Department. Sadly, none of the documents shed any light on the use of the postal system to celebrate Navy. One other excellent resource on Navy Day is the book “The Navy League of the United States” by Armin Rappaport, published in 1962 by the Wayne State University Press.

I trust the early samples shown in this article will encourage other members to search their collections for similar yet different material. I would like to thank John Young, Frank Hoak, Frank Perreault and Larry La Foe for their help in preparing this article.