Navy Day 1945 was chosen as the USCS theme for 2005. A survey of USCS LOGs from the 1930s and 40s indicate Navy Day was an important event that caught the attention and enthusiasm of our members. A quick count shows over 35 articles that mention Navy Day in some fashion. The articles query the membership about early Navy Day cachets and cancels, describe future cachets and list the numerous Navy Day 45 cancels which are the basis of USCS Data sheet #24. The request for early Navy Day covers brought forward four different examples in three separate efforts over the two decades.

The illustration below comes from Bulletin #66 dated November 1935. This very early cacheted Navy Day cover was supplied by C. Nagle Miller (USCS #49). Though the date, 23 October 1924, is incorrect for Navy Day the cachet may be the very first for that theme. This type 9 strike was identified in the article as coming from the USS ANTARES (AG-10). She used this cancel from 1924 to 1926. 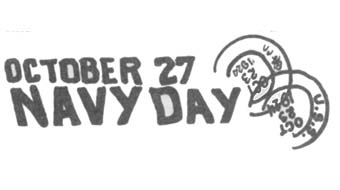 Bulletin #166 from October 1946 provides two more early Navy Day covers. These were found as a result of a survey request to USCS members in a prior LOG. A cover dated 27 October 1928, was provided by Victor Reichenbach (USCS #1813). It is a type 3s from USS NIAGARA (PY-9). No cachet was pictured and none was reported however, the cover was addressed to Dr. F. E. Locy. This cancel was in service from 1927 to 1928. 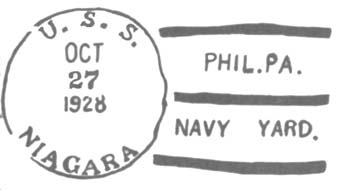 The illustration below, also dated 27 October 1928, has a Brooklyn Navy Yard cancel and was supplied by Everett Earl (USCS #20). The article does not show the complete cover but describes it as having a three-line rubber cachet saying ” Visit Your Navy Yard — On–Navy Day, Oct. 27.” 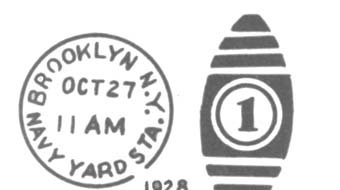 The Cover of the Month feature from the October 1990 LOG, whole number 683, shows a cover supplied by Larry Reilly (USCS #8827) with a 1928 Navy Day cancel and cachet, see below. This is a USS RICHMOND type 6j cancel with a three-line rubber cachet using purple ink. 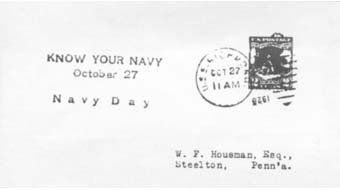 Navy Day began in 1922 and was established by the Navy League of the United States. It gained early support from President Warren Harding. The last Navy Day was in 1949. Thus we collectors have a 27 year time in which Navy Day existed. This provides thousands of covers for the Naval Cover collector to find. What Navy Day cover, story or ship is your favorite? Provide a write up for the LOG and be a part of “Team Navy Day”.